Facing EU penalties over poor air quality, Germany has said it wants to test free public transport in five cities. Bonn and Essen are among the cities to serve as testing ground for the new project. 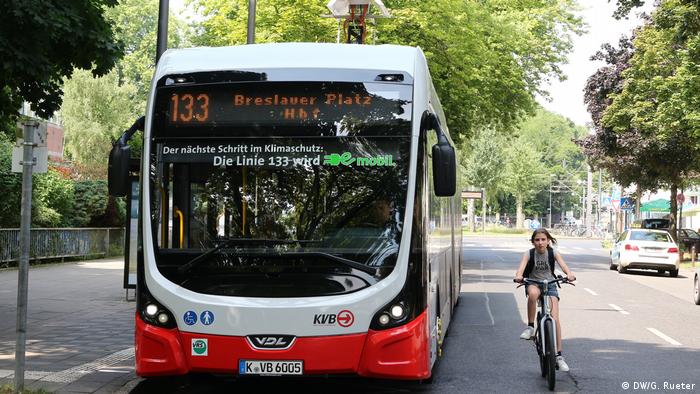 Under pressure from the European Union to rein in air pollution, the German government said it is considering a plan that would make public transportation free in its most polluted cities, according to a letter seen by German media on Tuesday.

They selected five cities to roll out the program: Bonn, Essen, Reutlingen, Mannheim and the town of Herrenberg which is south of Stuttgart — one of Germany's most heavily polluted cities.

'Not in planning phase yet'

Tuesday's letter left Germany's municipalities, including the ones selected for the free public transportation trials, scratching their heads. When asked about the details of the free ticket plans, a spokeswoman with the city of Bonn told DW that there wasn't much to elaborate on.

"It's not in the planning phase yet," the spokeswoman said, adding that there aren't any rollout dates or further information on how much the federal government will give the city to subsidize free public transportation.

Bonn Mayor Ashok Sridharan said he was informed about the government's plans over the weekend, but said in a statement that he was happy that his western German city was selected as one of the "Lead Cities."

"We also have one or two ideas that we can also propose, since we've been working on this topic for some time," Sridharan said.

The tricky road to ticketless rides

When it comes to making ticketless rides a reality, there are some pretty big questions that need to be answered first.

One of the biggest issues is that cities would need to beef up their public transportation fleets with more buses and streetcars — and eco-friendly ones at that — to accommodate the anticipated rise in passengers.

"It doesn't make sense to use more diesel buses of course," the city of Bonn spokeswoman told DW, adding: "We don't know of any manufacturer that would be able to deliver so many electric buses on such short notice."

The Association of German Transport Companies (VDV) told news agency dpa that they were "critical" of the German government's plans, particularly when it comes to how much it will cost.

According to the VDV, almost half of the money that goes into Germany's municipal public transportation companies comes from ticket sales — some €12 billion ($14.8 billion) a year.

"In the end, taxpayers will have to finance that," a VDV spokeswoman said.

The German government's idea to test free public transportation was also one of Berlin's latest attempts to conform to environmental standards and appease German carmakers.

On February 22, the Federal Administrative Court in Leipzig will consider whether driving bans for diesel cars are legal.

Should the court back such bans, it would likely be a game changer for air quality in Germany's smoggiest cities, but also deal a hard blow to the German auto industry.

Brussels has given Germany and eight other EU member states a final chance to offer proposals to reduce vehicle emissions and conform to EU air quality standards.

If the EU's environment chief Vella is not satisfied with Berlin's proposals, he may file a case with the European Court of Justice.

Last stop jail? How to deal with fare-dodgers in Germany

Judges in Germany say prosecuting persistent fare dodgers is a waste of valuable official time and resources. But transport authorities maintain traveling without a ticket is not a trivial offense. (01.02.2018)