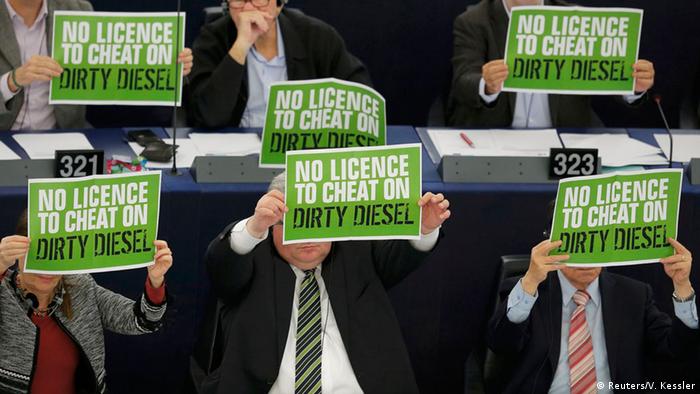 It seems the diesel motor will finally get its comeuppance now. Due to a court ruling, Stuttgart may have to impose a driving ban for older diesel cars as early as next year.

The southern German city lies in a valley basin that makes it prone to inversion weather conditions, meaning it frequently suffers from smog and huge quantities of respirable dust in the air. It is also the seat of the oldest carmaker in the world, Daimler, whose founder once claimed to have invented the automobile and whose successors at the company made the diesel motor an effective piece of car engine technology.

Each day, thousands of workers commute to Stuttgart by car - and most of them drive diesels because the fuel is subsidized by the German state, making them more cost-efficient.

Ironically, it may now be Stuttgart that is going to ring the death knell for the diesel car in German cities. On Thursday, the Transport Ministry in Berlin imposed a sales ban on 3-liter diesel SUVs manufactured by sports car maker Porsche , another carmaking giant based in Stuttgart. Porsche was caught cheating on diesel emissions tests with a so-called defeat device - software that manipulates the car's emissions control system.

Meanwhile, the ruling by the court in Stuttgart on Friday has been closely watched by city councilors across Germany, who face similar problems with high air pollution and clean air acts that are woefully insufficient to curb rising emissions from traffic. But does this mean they have now been given a free hand to impose wholesale bans on diesel cars? Not quite.

First, there is still a ruling pending in Germany's highest administrative court as to whether municipalities are actually allowed to impose such bans. Second, the Stuttgart ruling was made by only a first-instance court, so those opposing it will surely appeal this and other likely rulings against them all the way up to the highest German court. Most importantly, Germany's mighty carmakers will certainly move to act now, as they are unlikely to simply let go of a technology that has reaped them huge profits for decades.

Under fierce fire for emissions cheating and antitrust behavior, the beleaguered German auto industry now has to deliver on its promise of riding on the cutting edge of technology. And the court in Stuttgart has made sufficiently clear that a simple software update won't do.

What is required now is state-of-the-art particle filters and whatever else is available in terms of modern technology to come to grips with hazardous diesel emissions. Engineers at Daimler, Volkswagen and other German automakers are now called upon to bring out their best, no matter if it costs lots of money. After all, they have earned plenty in recent years.

On August 2, they will have the opportunity to take the first step in regaining lost trust. At a meeting between government officials and representatives of the German auto industry - already dubbed a diesel summit - proposals need to be put on the table about how they want to curb hazardous nitrogen oxide in diesel exhausts.

Should the car bosses botch this opportunity, they will be completely at sea. What else, then, would it take for them to wake up other than hitting a wall with open eyes? Don't they realize that a driving ban for diesels in inner cities is just the first step towards measures that will hurt even more?

And how about all the other carmakers? Not all of those living in Stuttgart drive Mercedes and Porsches. The majority certainly own Peugeots, Toyotas or Volvos - cars that are not exactly known for a higher degree of environmental friendliness. None of them has ever come forward, saying they too want to step up to the challenge.

But what the German debate about diesel emissions and the future of the car industry requires first and foremost is less ideological vociferation.

Take Stuttgart itself for an example: Much of the respirable dust pollution in the city doesn't originate from traffic at all. It is the result of a mixture of adverse weather conditions, location and other causes like surrounding agriculture.

Matthias Klinger, a renowned transportation research expert, argues that even a complete ban of traffic in the city would reduce dust pollution only by about 10 percent.

Another example is Hamburg. The northern German port city, too, would benefit from a driving ban only marginally because the huge container and cruise ships in its harbor spew out tons more dangerous emissions. Will they have to remain moored outside of the city in the future?

No, it is definitely too early to call it the end of the diesel engine. But the ruling in Stuttgart is a signal that needs to be heeded by politicians as well as the auto industry. It has finally unleashed a serious debate about the health hazards of car emissions and how to curb them. More than that: Germans are starting to rethink their individual mobility and what role the country's mighty auto industry has to play in it.