German politicians want to stop the Bundestag from ballooning in size and adding ever more lawmakers. The new reforms would see Germany cut the number electoral districts from 299 to 280 by the 2025 election. 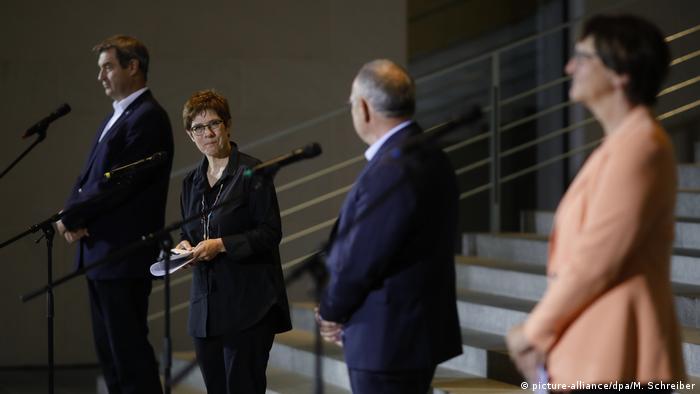 Germany's grand coalition agreed late on Tuesday to electoral reforms aimed at reducing the number of lawmakers in the Bundestag, Germany's lower house of parliament.

After lengthy negotiations,  Chancellor Angela Merkel's Christian Democrats (CDU), their Bavarian sister party the CSU, and the Social Democrats (SPD) all agreed on a two-stage model that would begin next year and reduce the number of constituencies from 299 to 280 by the 2025 election. The move would hopefully see the growth "dampened," CDU leader Annegret Kramp-Karrenbauer said.

The bloated Bundestag currently houses 709 lawmakers, making it the largest democratic chamber in the world. The only Parliament that holds more is the Chinese National People's Congress, which has 2980 deputies.

Without the alterations, it was feared that more than 800 lawmakers could be crammed into the Bundestag after next year's elections.

This compromise was reached by the coalition leaders after eight hours of negotiations. CDU leader Annegret Kramp-Karrenbauer described the talks as "difficult" while CSU leader Markus Söder said they were "somewhat tough" but that a "fair compromise" had been reached.

SPD leader Norbert Walter-Borjans was also satisfied. The agreement would ensure that after the 2021 elections "the Bundestag would be smaller than before," he said. "It is important brakes will be applied there."

Other reforms under discussion, which will be reviewed after the 2021 nationwide poll, included lowering the voting age to 16, extending the legislative period from four to five years, and regulations on equal representation of women in the Bundestag, according to the coalition committee's resolution paper.

The coalition leaders also endorsed measures to quell the negative economic impact of the coronavirus crisis.

Notably, they agreed to extend the short-time work subsidies until the end of 2021. The short-time work scheme is intended to save jobs by allowing employers to reduce the employees' hours but keeping them in work. It had been due to expire in March next year.

"Corona[virus] remains a reality and a challenge," said Annegret Kramp-Karrenbauer. "Today we have agreed that we will extend important and effective measures to how we deal with the coronavirus."

The grand coalition also vowed to keep anti-bankruptcy measures in place, in a move which would allow firm facing pandemic-related troubles to delay filing for insolvency until the end of 2020.

As a consequence of the coronavirus pandemic, millions of people around the world face increased poverty, disease and famine. Germany's political parties are currently debating whether to increase funds.