Although 67 percent of Germans think Merkel is no longer the leader she once was, they don't see many alternatives. According to a new survey, three-quarters of the country think it's time for a change at her CDU party.

That didn't mean, however, that Germans have completely lost faith in their long-time leader. Some 65 percent of respondents said they believed that Merkel was still "a good chancellor."

The bigger problem, the poll suggests, is the lack of other stand-out personalities in her center-right Christian Democratic (CDU) party, which after Merkel's 12 years in office has not been able to come up with an heir apparent to the chancellor.

Three-quarters of Germans said that it was time for "new personnel" in the CDU. 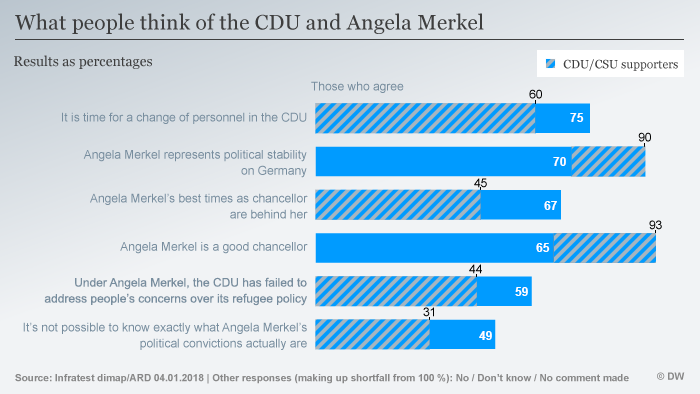 Over 100 days without a government

The survey also highlighted the growing frustration that more than 100 days after the country's general election on September 24, the seven parties in the Bundestag have yet to form a government.

Although the CDU and its Bavarian sister party, the CSU, gained 32.9 percent of the vote, the relatively weak result has left them scrambling for coalition partners. After talks with the pro-business FDP and Green party fell through, the CDU has had to approach its biggest rivals and reluctant "grand coalition" partners, Social Democrats (SPD), to see if the center-left would agree to rule together for four more years. 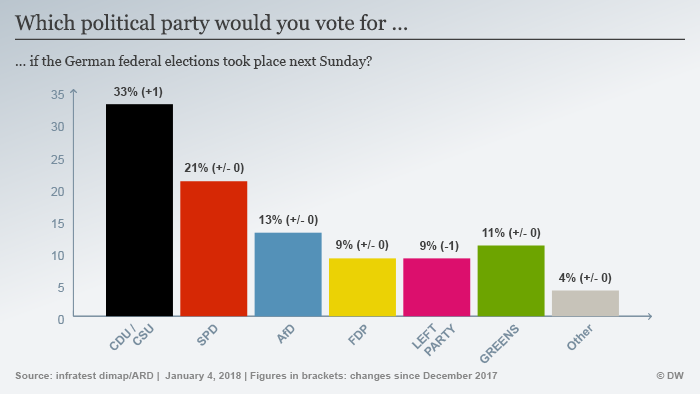 Although a grand coalition may be the only way out of a minority government — an unstable option Berlin wants to avoid at all costs, Germans were less than enthusiastic at the prospect. About 45 percent said they would support another CDU/SPD pairing, while the greater majority — 52 percent — said they simply didn't feel strongly enough about it to register an opinion, which perhaps says more about the state of German politics than anything else.

Opinion: The era of Angela Merkel is coming to an end

Germans have had enough hemming and hawing over a new government and think the chancellor should get on with forming a coalition. A new survey clearly shows the Angela Merkel era is ending, says DW's Jens Thurau. (06.01.2018)

Germany's chancellor has warned that differing opinions threaten to tear "a rift" in society in a time of political uncertainty. She has called for more mutual respect and understanding. (31.12.2017)

The CSU, sister-party to Angela Merkel's CDU, is taking to its annual Bavarian retreat to meditate on the conditions for upcoming coalition talks. The conservative party is likely to make a few tough immigration demands. (04.01.2018)