Angela Merkel's CDU keen to form government, but SPD playing hard to get

Nearly three months after the elections, Merkel is struggling to form a government. Seen by many as an anchor of stability in Europe, Merkel needs to deliver, but her preferred partners at the SPD are biding their time. 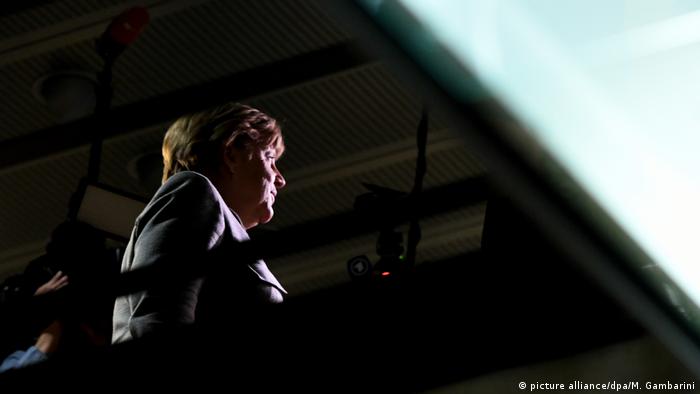 Chancellor Angela Merkel's Christian Democrats (CDU) with her Bavarian CSU allies were clear in their intentions as the parties issued a statement late on Wednesday after talks in Berlin.

"The CDU and CSU representatives made clear that they wanted to begin exploratory talks with the SPD on creating a stable government," the conservatives said in a statement.

But an official with the Social Democrats (SPD) said the party would first hold consultations before it announced a decision on Friday.

After spending four years in a grand coalition and suffering its worst election result since 1933, the SPD said after the September polls it would go into opposition.

But after talks for a coalition between the CDU/CSU, the Greens and pro-business FDP failed, the SPD responded to encouragement from President Frank-Walter Steinmeier to reconsider a coalition.

Cooperation or a grand coalition?

Some SPD party members favor a cooperation coalition. This would offer Merkel support on some areas such as the budget, Europe and international affairs but oblige her to find support for other policies.

Leading Social Democrat Carsten Schneider told German television ahead of the talks: "A decisive point for the SPD is that the social agenda has more prominence in Germany."

Commentators have identified three main areas where the parties lack agreement: the SPD's desire for compulsory state health insurance for all, Schulz's vision of the EU as a "United States of Europe" and the SPD insistence family members of refugees in Germany be allowed to join them.

Exploratory negotiations are expected to continue into the first half of January.