Opinion: The era of Angela Merkel is coming to an end

Germans have had enough hemming and hawing over a new government and think the chancellor should get on with forming a coalition. A new survey clearly shows the Angela Merkel era is ending, says DW's Jens Thurau. 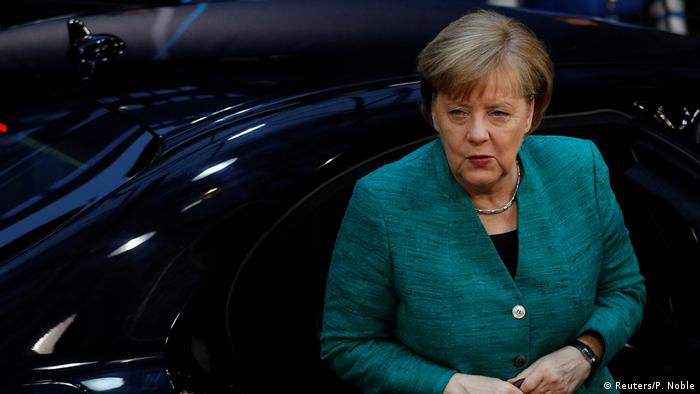 There is certainly room for enthusiasm when it comes to forming yet another so-called grand coalition in Germany. Only 45 percent of people surveyed by the opinion research institute Infratest-dimap at the beginning of this year would be pleased if the conservative Christian Democratic Union (CDU) and its Bavarian sister party the Christian Social Union (CSU) were to once more strike a deal with the center-left Social Democrats (SPD). Support for a grand coalition has clearly diminished compared to four years ago, and even then a government consisting of Germany's two major parties was not viewed favorably. However, Angela Merkel is still doing comparatively well with the people. Sixty-five percent of those polled say that the CDU leader is a good chancellor. In times of hyper-globalization and nationalism, many leaders around the world can only dream of the popularity she enjoys.

An impressive 70 percent of people feel that Merkel stands for stability in Germany. That is the enormous credit the chancellor has been drawing from for years now. People have never seen her as a great reformer, let alone a visionary. But she comes across as the anchor of stability, a calm and collected person in turbulent times. It doesn't sound exciting but it reflects the voters' expectations. There is nothing Germans fear more than chaos.

Merkel era coming to an end

Yet at the same time, people agree that the Merkel era is coming to an end. A whopping 75 percent are in favor of renewal within the CDU. Some 67 percent say that Merkel's best days are over. Just under half of those surveyed claim that they do not know exactly what the chancellor stands for. This is indicative of Merkel's reserved political style, which has been her recipe for success for many years. But now that the cracks in society are visible and stability is slipping away, her steady hand and avoidance of touchy issues become less attractive. Forty-five percent of people feel comfortable with the idea of Merkel handing over power to a successor in the next four years.

No one wants a minority government

Only a minority of voters believe the government should carry on as it has in the past. If a renewed grand coalition does not work out, then a clear majority (54 percent) are in favor of new elections. Back in December, the Infratest-dimap survey indicated that people thought that a minority government could work, but opinions appear to have changed. This is a clear indicator of Merkel's waning popularity. A grand coalition would be accepted one more time — but that's it. Voters cannot imagine Merkel running an untested form of government that has to constantly justify its plans and seek different issue-based partners to form a majority in parliament. Merkel herself does not want this, as she has always made clear. In this respect, the chancellor still has a firm idea what the electorate has faith in.

What does this mean for the upcoming exploratory talks and subsequently, coalition negotiations between the CDU/CSU and SPD? These processes must be quick. People are tired of testing the waters, the tactical moves and the endless talk show appearances made by potential government partners. All in all, the message of the January survey is to buckle down and focus on the essentials. It seems that the CDU/CSU and SPD are beginning to understand this. They now say they want to complete the first round of talks quickly and avoid unnecessary media appearances. Let's see how long those New Year's resolutions last.