The longest Germany has ever taken to form a new government was 86 days. Now, that record has been broken. And no one has any idea when the waiting will be over. 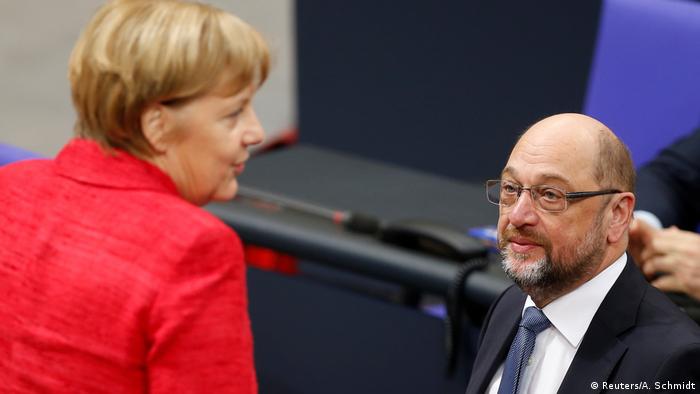 So much for German efficiency. Ongoing attempts to form a new government after the country's September 24 election are once again looking bleak.

After the collapse of lengthy coalition talks between Chancellor Angela Merkel's Christian Democratic Union (CDU), its Bavarian sister party the Christian Social Union (CSU), the liberal Free Democratic Party (FDP) and the environmental Green party, all hopes were put on resuscitating a grand coalition between the CDU and the Social Democratic Party (SPD). Now those hopes will have to be put on ice.

SPD leader and former chancellor candidate Martin Schulz announced via Twitter on Tuesday that his party's leadership would not discuss the possibility of coalition talks until they convene at a special party conference in Bonn on January 21. The reason, he said, was that the CSU had refused to begin talks until after its traditional conclave of federal parliamentarians in early January.

Merkel will, however, meet with Schulz, CSU leader Horst Seehofer and all three parties' parliamentary group leaders on Wednesday to lay the groundwork for the future talks.

After the SPD suffered its worst electoral defeat of the post-war era under his leadership, Schulz declared it would take on the role of opposition party rather than join the government. Nevertheless, at the behest of German President Frank-Walter Steinmeier, also a member of the SPD, Schulz agreed to reconsider.

At the SPD's party conference in early December, members were divided about whether to take another run at governing with the CDU. Many in the party's youth wing, for instance, are very opposed to the idea.

The special party conference in January, to be attended by some 600 delegates, represents the final hurdle in a months-long governing dearth for Germany. Schulz will have some heavy lifting to do if he is to convince members of the wisdom of beginning formal coalition negotiations.

Recently, the SPD's state association in Thuringia declared it was against forming yet another grand coalition. The party's past experiences have been rather dismal, having lost massive amounts of support both times they governed as Merkel's junior partner.

Some, especially those in the left wing of the SPD, have broached the idea of entering a coalition of selective cooperation, voting with the CDU on core issues, and seeking other, more flexible, voting blocks on others. Merkel, however, has said the idea is unacceptable.

One for the record books

To date, the longest Germany has gone without a ruling government coalition was the 86 days that the CDU, CSU and SPD needed to agree to a grand coalition under Merkel's leadership in 2013. The new record is anyone's guess.