Germans and Americans 'worlds apart' in view of relations

People in Germany and the United States appear to have very different ideas about the state of relations between their countries. Germans see Berlin and Washington increasingly at odds, but Americans are more positive. 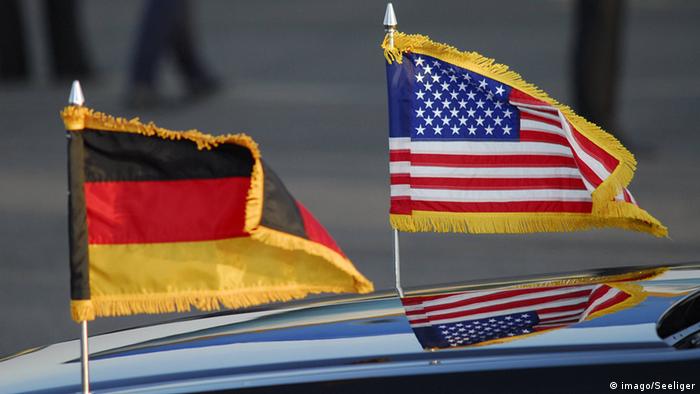 A study published on Monday by the Pew Research Center found that Americans and Germans were "worlds apart" in how they viewed their countries' relations with one another.

While most Germans said current ties were at something of a low point, a comfortable majority of Americans viewed relations positively.

In the US, only a quarter of people surveyed said they felt relations were bad, compared with 73 percent of Germans.

That figure represents a sharp upturn in negative assessments of the situation compared with 2017, when 56 percent of Germans said relations were poor. However, despite their generally gloomy appraisal, only one in 10 Germans said the relations were "very bad."

Although Americans seemed to have a rosier perception of relations than Germans, very few rated Germany as one of the US's most important partners when it came to foreign policy. Here, the United Kingdom rated highest — on 37 percent — while Germany came in at a distant seventh place, on 9 percent.

Germans rated France as one of the two key foreign policy partners for Berlin, on 61 percent. However, more than a third — 35 percent — also saw the US in this light.

Germans said they felt the relationship with the US was too close, wanting greater independence, while Americans felt they wanted the countries to be closer on foreign policy. Correspondingly, more Germans wanted their own country and European allies to spend more on national defense budgets than when the survey was carried out last year, a rise from 32 percent to 43 percent. For Americans, European defense spending was less of an issue than it was in 2017.

Attitudes to NATO had stayed the same in both countries, and were broadly positive.

US President Donald Trump's "America First" platform and his attitude to NATO has rankled with some European allies. The president has suggested he might be willing to pull the US out of NATO if member countries in Europe don't significantly boost their defense spending.

The survey, based on telephone interviews in September by the Pew Research Center in the US and the Körber Stiftung research group in Germany, also included a section on tariffs.

Read more: Religiosity reigns in US, on the wane in Western Europe

Participants in the US were asked if they supported Trump's imposition of tariffs on aluminum and steel against European allies. There was overall opposition to the move, although it was close, with 51 percent opposing the tariffs and 44 percent in favor.

A significant majority of Germans who were asked about retaliatory tariffs imposed by Brussels on the US said they supported the measures. Of those asked, 78 percent said they were in favor.

Is Europe bold enough to counter US ambivalence?

The Munich Security Conference is expected to be dominated by US President Donald Trump's ambivalence toward traditional alliances, leaving Europe no choice but to step up its defense initiatives. (16.02.2018)

A US-based research center has surveyed 26,000 people in 25 countries and found few with confidence in President Donald Trump to do the right thing. His low status is nearly matched by the Russian and Chinese leaders. (02.10.2018)

Germans say Russia is more reliable than the United States

A new survey published by German public broadcaster ARD shows Germans trust Russia more than the US. America's brand appears to have suffered considerably since the election of Donald Trump as US president last year. (09.12.2017)