After months of political upheaval, Chancellor Angela Merkel is now set for the final step before her fourth term. Merkel told the press Monday morning that many issues required the government to "start working soon." 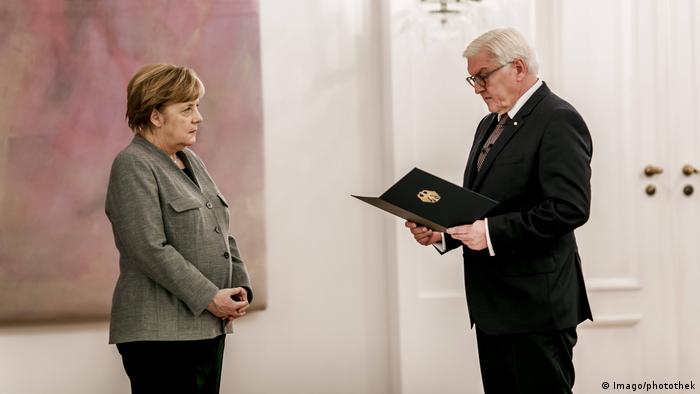 The path to a renewed Merkel chancellorship was freed on Sunday when the Social Democrats (SPD) decisively backed another four years of "grand coalition" government with Merkel's Christian Democrats (CDU) after two-thirds of party members voted in favor of it.

"I think it's good for our country that this period of uncertainty is over," Steinmeier said.

In a short statement on Monday morning, Merkel said that "after six months, the people have the right to a solid government."

She also promised to work together with France to strengthen the European Union, and vowed to secure Germany's economy and job market for the future.

How the vote for chancellor works

The president wrote to the lower house of parliament with his proposal. The Bundestag will then set a date for a vote on Merkel's candidacy, believed to be March 14.

If Merkel does not secure an absolute majority of votes, the Bundestag will then have a two-week period — with no limit on the number of votes held — to see if she can muster an absolute majority. If that still isn't reached, parliament must immediately vote a third time. In round three, a relative majority is sufficient.

Merkel has been leading a caretaker government since elections on September 24 saw her CDU party emerge victorious, but still in need of coalition partners in order to form a majority government.

After talks with the Green party and Free Democrats (FDP) failed, the SPD had been struggling with whether to forge ahead with another grand coalition or become Germany's largest opposition party.

A new poll has called into question the SPD's ability to govern alongside Chancellor Angela Merkel's conservatives. Nevertheless, SPD voters see a grand coalition deal as the best way forward for their party. (02.03.2018)

The Bavarian politician will head from Munich to Berlin to take up the reins of the newly-renamed Interior Ministry. That is, as long as the proposed grand coalition government gets approved by SPD members. (01.03.2018)

A new grand coalition of Chancellor Merkel's CDU/CSU and the Social Democrats (SPD) depends on the approval of SPD members. But it's not just about forming a new government — it's about Germany's role in Europe. (04.03.2018)