Germany's chancellor will get a fourth term after her junior partners, the SPD, voted for a coalition deal. The new government could be in place in less than two weeks' time, ending months of uncertainty. 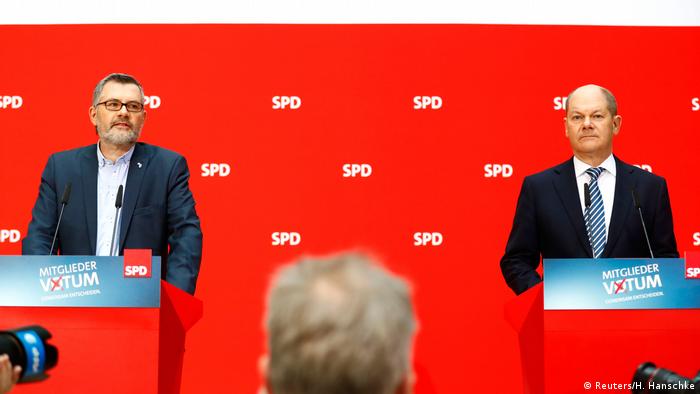 More than five months after Germans went to the polls in the September 24 national election, Germany will be getting a new government. The final hurdle was cleared when the Social Democratic Party (SPD) rank-and-file sanctioned the coalition deal that party leaders had negotiated with Angela Merkel's conservatives.

Sixty-six percent of party members who voted supported a continuation of the grand coalition, while 34 percent opposed it — a clearer margin than many in the party had expected.

More than 450,000 SPD members had been called upon to cast their votes in a mail-in ballot. The outcome was announced at party headquarters in Berlin on Sunday morning.

"This wasn't an easy decision for the SPD," said acting party Chairman Olaf Scholz. "In the discussion [about the deal], we've come closer together. That gives us the strength for the process of renewal we are embarking upon." 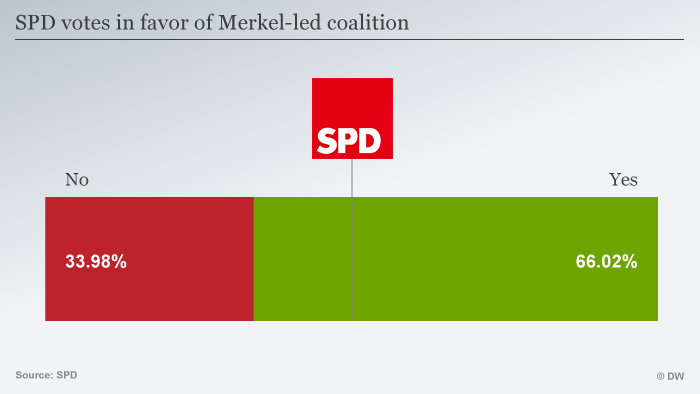 The coalition agreement can now be signed, and the Bundestag will elect Merkel chancellor of Germany for the 19th legislative period. That vote is set to take place on March 14. It will be the third grand coalition in Merkel's 13 years as German leader, but it only came about after efforts to form a coalition with the Greens and center-right Free Democrats (FDP) failed.

Former SPD Chairman Martin Schulz initially ruled out another grand coalition and was forced to resign after he flip-flopped on the issue. Social Democratic leaders were persuaded to conclude another deal after winning key concessions from Merkel and her Christian Democrats (CDU), as well as earning consent on ministerial posts from the CDU's Bavarian sister party, the Christian Social Union (CSU). The SPD will have control of Germany's powerful Finance Ministry, among other things.

Conservatives have already named their ministers in the new government, while Social Democrats are expected to announce their picks for the party's six cabinet positions this week. Party Chairman Scholz did not specify names on the topic of who would be filling the six posts, but he did say that the SPD team would consist of three men and three women, and would be a mixture of familiar and new faces.

The decision about whether to form a new partnership with the conservatives divided Social Democrats, many of whom blame the SPD's participation in grand coalitions for the party's slide to historic lows in opinion polls.

The yes campaign in the members' vote was led by Scholz and designated party Chairwoman Andrea Nahles, who is expected to take over the SPD party reigns in April. The no camp was spearheaded by the head of the SPD's youth wing, Kevin Kühnert. 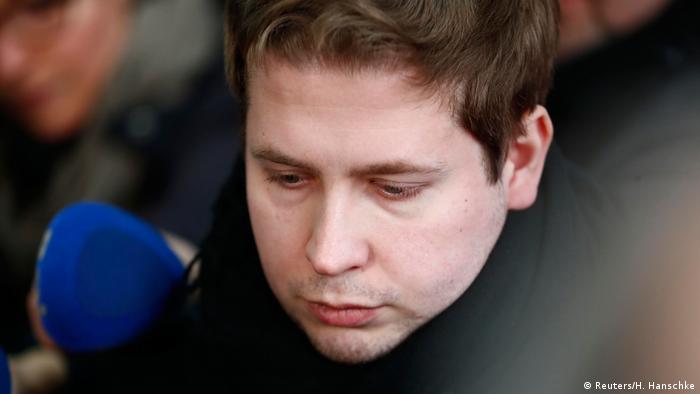 ​Despite losing the vote, Kühnert has become the voice for reform in the SPD

"I and many young SPD members are more disappointed by the result than anything else," Kühnert said after the outcome was made public. "But this is a democratic decision, and we accept it. We're not sore losers."

Kühnert also promised that he and the SPD youth wing would continue to press for reforms within the party. But there was no overlooking the obvious irritation on the face of the youth wing leader as he fielded reporters' questions in front of party headquarters.

"We'll continue to voice criticism — in particular of our partners, but also of our own people," Kühnert said. For their part, party leaders assured no-voters that their voices would be heard. 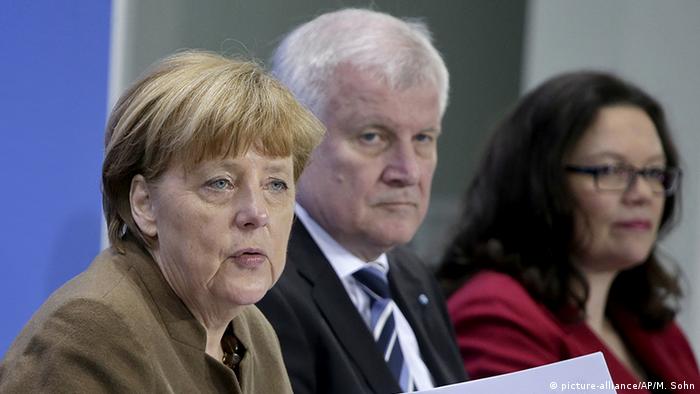 Merkel and the conservatives have a new, old partner in Nahles' Social Democrats

Merkel's conservative Christian Democratic Union (CDU)  sanctioned the coalition agreement last week at a party conference. And the chancellor was quick to express her pleasure at Sunday's announcement.

"I congratulate the SPD on this clear result and look forward to further cooperation for the welfare of our country," the CDU tweeted in Merkel's name.

"This is a good decision by the SPD and especially for our country," Kramp-Karrenbauer wrote. "With it, after the conservatives, Social Democrats have declared that they're willing to accept responsibility for the country in a joint government."

Designated conservative Economy Minister Peter Altmaier also gave the SPD decision a thumbs up via Twitter — but not all the messages on that platform were positive.

The far-right populist Alternative for Germany (AfD) mocked the SPD's decision, predicting that the Social Democrats' decline would continue when Germany holds its next national election.

"In 2021 at the latest, they'll pay the price," the party tweeted in a message that contained cartoons of Nahles and Merkel and the caption "four more nightmare years for Germany."

The other parties were more respectful but hardly any more positive.

"The SPD voted as expected," tweeted FDP General Secretary Nicola Beer. "They were more afraid of new elections than of being further marginalized in another Merkel coalition. Merkel's worries are over. She stays in the Chancellery, but Germany is only moving sideways."

Left Party co-Chairwoman Katja Kipping wrote that the SPD and the conservatives were returning to the seats of power "weakened and apathetically."

Green Party co-Chairwoman Annalena Baerbock commented: "It's good that the political impasse is finally over. We'll have to fill the holes regarding the climate, care for seniors and child poverty from the parliament."