The chancellor's conservative party has given a green light to forming a new government with the Social Democrats. But despite the harmonious front, the internal tensions in the party are impossible to ignore. 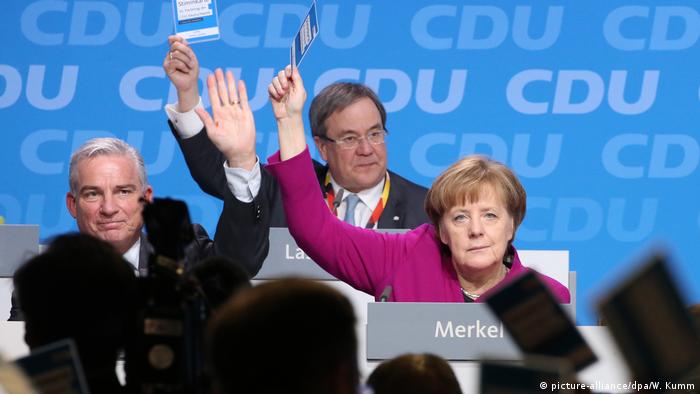 As expected, delegates at the CDU party conference in Berlin on Monday approved by a wide margin the grand coalition agreement with the Social Democrats (SPD), with only 27 of the 975 delegates voting against it. Beforehand, Chancellor Angela Merkel urged her fellow party members to support the deal.

Merkel acknowledged that although the conservatives won last September's national election, their share of the vote declined by around 7 percent in what she "called the difficult, unprecedented situation" of a far-right populist party, the Alternative for Germany (AfD), entering to the Bundestag.

Delegates at the CDU conference also voted by a large majority to elect former Saarland State Premier Annegret Kramp-Karrenbauer as the party's secretary general. The 55-year-old is a close Merkel ally, who some observers say could be the next chancellor.

With many in the rank-and-file unhappy about the concessions Merkel has agreed to make to the SPD, she argued that the coalition deal was the best she could get.

"We're not going to throw a mandate to govern before the voters' feet just because we're disappointed," Merkel said. "People have always been able to count on the CDU to take responsibility for the country. That's the CDU brand."

She also defended her decision to give the SPD control over the powerful Finance Ministry.

"Should we have allowed the deal to fail just because of this one position?" she asked. "My answer is no."

Merkel argued that the economy ministry, which the CDU would control, was a worthy replacement, but the applause from delegates was noticeably lukewarm. 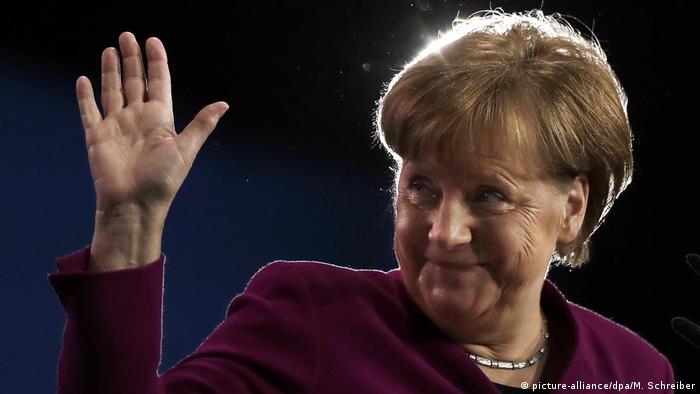 Merkel blamed the CDU's loss of support on public insecurity about Germany taking in large numbers of refugees, technological changes to society and conflicts in the EU and the world. Merkel said the coalition agreement addressed these misgivings and reflected the policies the CDU had advocated in last year's election, particularly with regard to families.

She was also at pains to assure the rank-and-file that the agreement would require integration from the over 1 million migrants Germany has accepted in recent years – the issue that has been Merkel's biggest Achilles' heel.

The chancellor also promised that her next government would not go any further into debt while making "record investments" for the future. She stressed that the coalition agreement, entitled "New Impetus for Europe," would strengthen Germany by strengthening the EU.

"The destiny of Germany and Europe lies in our hands," she told delegates. "We want to shape that destiny before others do. That's why we need a new impetus for Europe."

The need for 'tact and courage'

The conference was called to greenlight the coalition agreement, but it was also an occasion to smooth some of the friction over the present and future direction of Germany's main conservative party. Traditionalists within the CDU haven't been particularly enamored with Merkel's centrist and pragmatist policies. Indeed there has been some internal debate as to whether the CDU is even still a conservative party.

In a nod to that faction, the conference began with an ecumenical religious service, as if to remind everyone in attendance of what the C in CDU stands for.

"What's unique about the CDU is our Christian view of humankind," Merkel said toward the end of her keynote speech. 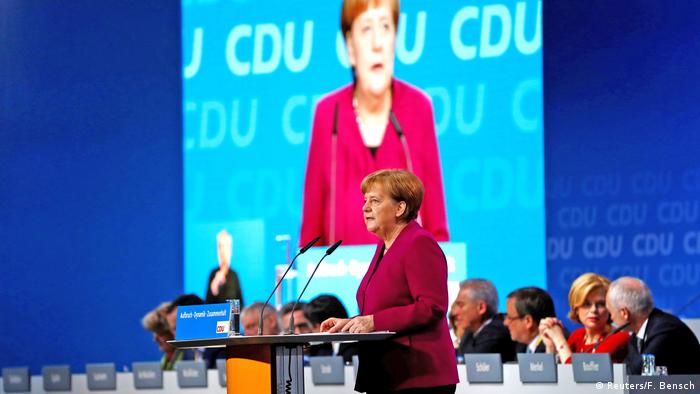 At the same time, there is broad consensus that the party needs to modernize itself. That was reflected not only in the relative youth of Merkel's nominees, made on Sunday, for her potential next government.

"We have a very good team and have found excellent people for the tasks that await us in the Cabinet," CDU parliamentary leader Volker Kauder told DW. "With a lot of tact and courage, Angela Merkel has presented us with something very good."

For now, the CDU is still very much Merkel's party, but her position now is weaker than it has been at any time since she first assumed the chancellorship in 2005, as the comparatively tepid response to Merkel's speech made clear. The third grand coalition government Merkel is attempting to form remains less popular among conservatives than either of its predecessors.

Not enough CDU in the coalition deal?

Resistance to a continuation of the grand coalition may be far stronger within the SPD than among CDU members. But a handful of critics did brave the frigid temperatures in Berlin to try to persuade their fellow party members to vote against the coalition deal.

"There isn't enough CDU in this agreement," one critical member, who didn't want to be identified by name, told DW. She said she was afraid that there would be rampant spending under a renewed conservative-SPD alliance. She also didn't neglect to point out her belief that refugees should integrate into mainstream German society or leave the country.

But nowhere near enough delegates followed that argumentation to trip up Merkel's plans for her next government. Although many of the speakers had critical words for Merkel, very few of them directly challenged the coalition agreement.

The irony is that despite winning September's election and once again demonstrating her ability to get conservatives, however grudgingly, to follow her lead, Merkel's political future depends on the rank-and-file of the rival SPD.

Social Democratic Party members are currently voting on the coalition deal by mail. Results are expected on or around March 4. Merkel now needs their help to ensure another term in Germany's most powerful political office.