Chancellor Olaf Scholz and NATO chief Jens Stoltenberg say Russia faces severe consequences if it invades Ukraine and urged Moscow to de-escalate. The US has warned a Russian attack could come at "any point." 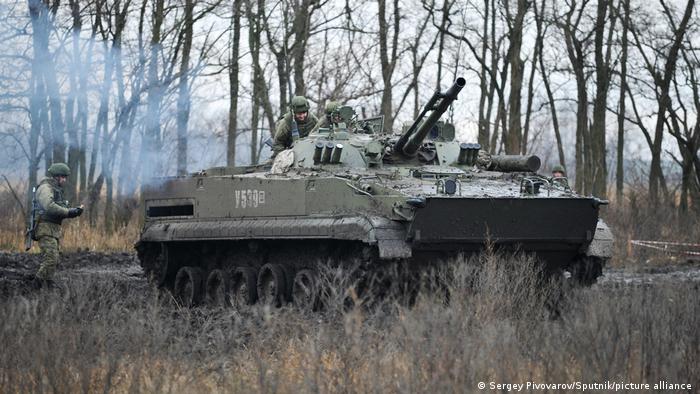 The German chancellor and the head of NATO on Tuesday urged Russia to de-escalate amid fears that Moscow may be planning an invasion of Ukraine.

NATO Secretary General Jens Stoltenberg and Chancellor Olaf Scholz spoke after the pair met in Berlin to discuss the perceived threat of a conflict.

Scholz said Germany and NATO expected Russia to ease the situation on the border with Ukraine by, for example, reducing the number of troops there.

He said both agreed that Russia would face severe political and economic consequences if there was an invasion.

"It is clear that there will be a high price to pay and that everything will have to be discussed should there be a military intervention in Ukraine," Scholz said.

Stoltenberg said NATO allies were keen to engage with Russia on any concerns that it may have, urging Russia to join talks.

"The risk of a conflict is real," Stoltenberg said. "NATO allies call on Russia to de-escalate. We encourage Russia to reverse its decision to cut diplomatic ties with NATO."

Moscow has stationed about 100,000 troops near the border with Ukraine, something the West has interpreted as preparation for invasion in order to force NATO to make concessions on on issues like the possible accession of Ukraine into the bloc.

In 2008, NATO offered Ukraine the prospect of joining, without, however, fixing any time frame.

Week of talks fails to ease tensions over Ukraine

Stoltenberg said he had invited Russia and NATO allies to new talks "in the near future." He said the aim was to "address our concerns but also listen to Russia's concerns, and to try to find a way forward to prevent any military attack against Ukraine."

Russia denies that it is planning an invasion.

However, DW's Terri Schultz reported that Stoletenberg at a separate event on Tuesday said that NATO has information backing up US claims made last week that Russia has operatives currently in Ukraine for the purpose of carrying out "false flag" operations as a pretext for invasion. Russia previously denied these claims.

The Western military alliance has been seeking dialogue with Moscow, although talks appear to have stalled.

Moscow on Tuesday rejected new talks on Ukraine unless the West responds to its demands. Russia is insisting its demands for security guarantees — including a permanent ban on Ukraine joining NATO — be taken seriously.

The West says that, under the terms of the Helsinki Final Act — a nontreaty accord to improve East-West detente during the Cold War — nations are entitled to a free choice on which alliances they join.

"We are now awaiting responses to these proposals — as we were promised — in order to continue negotiations," Russia's Foreign Minister Sergei Lavrov said at a joint press conference with visiting German Foreign Minister Annalena Baerbock.

While visiting Moscow on Tuesday, Baerbock said Berlin was prepared for a serious dialogue with Moscow about "security for all in Europe." On Monday, Baerbock visited the Ukrainian capital, Kyiv, where she warned that Russia faced a firm response if it resorted to military escalation.

US top diplomat heads to Europe for talks

In a call with US Secretary of State Antony Blinken on Tuesday, Lavrov demanded "concrete article-by-article" answers to Moscow's demands "as soon as possible," according to Russia's Foreign Ministry.

The US State Department said Blinken would fly to Ukraine and meet with President Volodymyr Zelenskyy on Wednesday to "reinforce the United States' commitment to Ukraine's sovereignty and territorial integrity."

"The trip follows extensive diplomacy with our European Allies and partners about a united approach to address the threat Russia poses to Ukraine and our joint efforts to encourage it to choose diplomacy and de-escalation in the interests of security and stability,'' the State Department said.

After Kyiv, Blinken will also travel to Berlin to meet with his German, British, and French counterparts to address the situation.

Blinken is also expected to meet with Lavrov on Friday in Geneva in an attempt to secure a "diplomatic off-ramp" to the crisis, an unnamed State Department official told reporters on Tuesday.

"We're now at a stage where Russia could at any point launch an attack in Ukraine," White House press secretary Jen Psaki told a press conference.

Amid the tensions, officials said on Tuesday that Russia is sending soldiers to Belarus for war games. Ukraine has repeatedly warned that Russia could launch an attack from various directions, including from Belarus.

Fomin did not specify how many troops would be involved but said that Russia would deploy a dozen Su-35 fighter jets and several air defense units to Belarus as part of the exercises.

In light of the troop buildup, NATO has intensified the strategy it has employed since Russia annexed the Crimean Peninsula from Ukraine in 2014.

The alliance has conducted more defensive military planning. It has also sought to modernize deterrents and support Ukraine with cyber warfare teams. However, NATO is under no treaty obligation to defend Ukraine, which is not a member.

Since 2014, NATO has prioritized reinforcing the Baltics and deployed four multinational battalion-size battlegroups — led by Canada, Germany, Britain and the United States — in Latvia, Lithuania, Estonia and Poland.

It's expected that if Russia were to invade Ukraine, NATO would be likely to raise its alert level and reinforce its troop presence in the Baltics and Poland. It's also thought the alliance might station more troops in southeastern Europe.

The European Union might face some of the toughest challenges if Russia does invade. These might include imposing sanctions on Russia, managing a cut in supplies of gas to Europe and accommodating refugees fleeing war.