Diplomats from the world's wealthiest nations will meet for three days to tackle issues like massive global food shortages resulting from the war, as well as Ukraine's hopes of joining the EU. 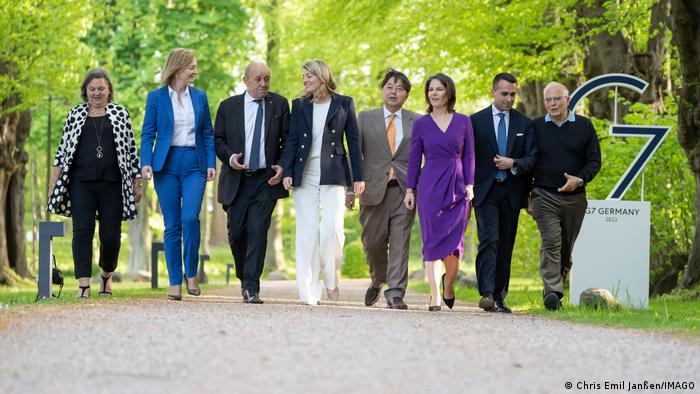 The three-day gathering is on Germany's picturesque northern coast, near the Danish border and not that far from Hamburg

Foreign ministers from the Group of Seven (G7) industrialized nations, gathered in Baltic Sea resort town of Weissenhaus in northern Germany on Thursday to begin three days of talks on a number of issues with a strong emphasis on problems arising from Russia's February invasion of and ongoing war with Ukraine, such as food and energy security.

German Foreign Minister Annalena Baerbock welcomed her counterparts from Canada, France, Italy, Japan, the UK and US, as well as guest attendees from Moldova and Ukraine.

Berlin's top diplomat said Ukraine's grain exports provide "food for millions of people around the world and which is needed particularly urgently in African countries and the Middle East."

The foreign minister said, "That's why we are discussing how the grain blockade exerted by Russia can be unblocked, how we can get the grain out to the world." Baerbock, a Green, said the issue had compounded food insecurity brought on by climate change, which is also on the agenda.

Have Germany and Ukraine solved their diplomatic spat?

Ukrainian Foreign Minister Dmytro Kuleba is also attending the event and was in Berlin earlier in the day, where he praised the "strength" of Chancellor Olaf Scholz's decision to deliver heavy arms to his country.

Kuleba also expressed hope that Ukraine's application to start the process of joining the EU would be swiftly approved. Typically, this process would take years or more often decades to complete.

French President Emmanuel Macron recently suggested some kind of partial membership mechanism for countries on the often long road to EU membership as a possible option for Kyiv.

Nicu Popescu, foreign minister of tiny neighboring Moldova is also in attendance as his country has been on the front lines of the war taking in refugees amid growing concern that it may be the next country that Russian President Vladimir Putin decides to invade.

The foreign minister of Indonesia, which currently holds the rotating chair of the G20 group of industrialized nations, is also scheduled to virtually attend meetings Friday, when those gathered in Germany discuss the issue of relations with China.

The US is being represented in Weissenhaus by Under Secretary of State Victoria Nuland while Antony Blinken recovers from a COVID-19 infection.

Blinken is expected to attend a meeting of NATO foreign ministers this weekend in Berlin, which will also be attended by the foreign ministers of Finland and Sweden. Both Scandinavian countries have expressed the will to overturn decades of non-alignment policy in order to join the defense alliance as a result of Russian aggression.

Ukraine: German Foreign Minister on the responsibility of the G7 nations