NATO: New challenges for the alliance as Finland and Sweden inch closer to membership? | Europe | News and current affairs from around the continent | DW | 12.05.2022

NATO: New challenges for the alliance as Finland and Sweden inch closer to membership?

Finland has announced its decision to join NATO as quickly as possible, Sweden is expected to follow suit shortly. What does this mean for the alliance? 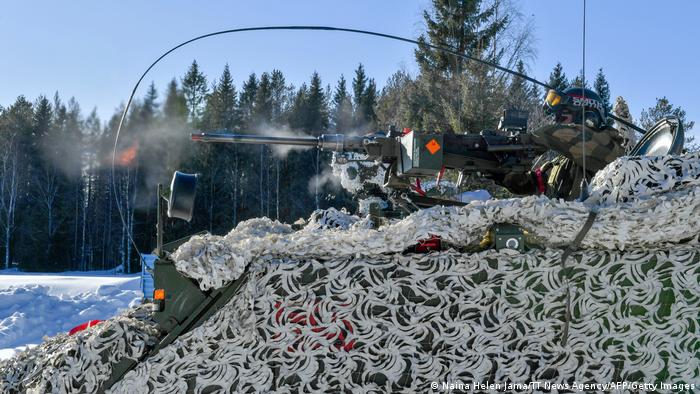 NATO's land border with Russia is set to more than double as Finland and Sweden submit their membership applications to the world's most powerful defense alliance.

Russia currently shares a land border of 1,215 kilometers (754 miles) with NATO members. Once Finland joins, that will increase to 2,600 kilometers

In a joint statement on Thursday, Finland's president Sauli Niinisto and Prime Minister Sanna Marin said their country's membership would strengthen the entire defense alliance. "Finland must apply for NATO membership without delay. We hope that the national steps still needed to make this decision will be taken rapidly within the next few days."

Sweden, meanwhile, which has traditionally been more reluctant to join the alliance, is expected to make its announcement this weekend. Hooking up: Swedish and Finnish NATO membership would bolster the alliance's defense

What does this mean for NATO?

Robert Dalsjo, senior NATO analyst at the Swedish Defense Research agency, told DW that Sweden and Finland's membership would mean that NATO's uncertainty over how Sweden and Finland would act in a crisis, would no longer exist.

"NATO will know for sure where Sweden and Finland stand, and that will increase security and deterrence in the Baltic Sea region. It will also make defending Baltic states easier for the alliance because there will no longer be any question of whether Swedish airspace can be used, for example, to send troops or supplies to Baltic nations," he said.

"Politically, it will also be a feather in the cap," he added.

"The first message of these nations joining NATO is political and targeted towards Russia. Secondly, for NATO it's all about the genuine capabilities that Finland and Sweden are bringing to the table. While everybody else in Europe has been sort of winding down their military capabilities after the Cold War, Finland and Sweden have been building their military capabilities, that can bring quite a bit to the alliance," he told DW.

Finland's ambassador to NATO, Klaus Korhonen, told DW that while Russia remains an important neighbor for Finland, political confidence in this relationship has been shattered.

"Russia, in a way, has changed the game in Europe regarding the future. So I think it certainly will be one of the tasks of Finland's foreign policy in the future also to build with Russia, again, a well functioning relationship, which is based on mutual interests. But how that will happen, remains to be seen."

What led to the change in stance?

After the disintegration of the USSR in 1991, both Finland and Sweden inched closer to the European Union and became members of the bloc in 1995. However, both nations continued to remain militarily neutral.

Sweden hasn't been a part of any military alliance for more than 200 years and also maintained neutrality during World War II. Finland on the other hand transitioned to neutrality after defeat by the Soviet Union in World War II.

But Russia's war in Ukraine has rattled both countries and triggered new discussions about future security policies.

"For Finns, foreign policy has always been about understanding that we have a long border with Russia, a combination of realism and idealism, and also an understanding that you can nudge history," Finland's former Prime Minister Alexander Stubb told DW.

But he highlighted how the war in Russia had resulted an even stronger national awakening in the country.

"A few weeks before the war started, 50% of Finns were against NATO membership and 20% were in favor. Overnight that changed to 50% in favor and 20% against." Now that Finland has made its announcement he thinks that support will go up to 80%.

For Sweden, the move to possibly joining the alliance is even more of a paradigm shift.

"NATO has never seen a less enthusiastic applicant than Sweden, currently under the Social Democrats. They knew that if Finland  applied, they would have to apply, because otherwise Sweden would be all by itself outside NATO and it will have to spend a lot more on defense," Elisabeth Braw, Resident Fellow at the American Enterprise Institute told DW.

Stubb added that when realities on the ground change, both Finland and Sweden are capable of making quick decisions.

"Finland has done so throughout its history. Sweden hasn't had the necessity to do that. But now when they face an aggressive revisionist, imperialist, totalitarian, authoritarian Russia, they are coming to the conclusion that NATO membership is the way to go," he said.

NATO members have made it clear that Finland and Sweden would be "welcomed with open arms," with the alliance's chief Jens Stoltenberg adding that their membership process would "go quickly."

Yet Swedish Defence Research Agency's Dalsjo said that the big challenge for NATO would not be Sweden and Finland's application, but how to deal with the impact of the war in Ukraine.

"NATO has clung to the notion that mankind had turned a corner and that Russia was a strategic partner. For that reason, the alliance has not built up a robust force posture in the East. That will have to change," he said.

Rasmussen Global's Nedelcu says that this Nordic accession would strengthen NATO's presence in the Baltic region.

"Finland and Sweden are already among NATO's strongest and most integrated partners and joining the alliance will result in stronger NATO naval presence in the Baltic sea," he said.

Sweden beefs up its defenses

Moscow, meanwhile, has warned of consequences. The Kremlin's spokesperson, Dmitry Peskov, has stressed that NATO's eastward expansion would not bring stability to Europe.

But Braw says that a Russian invasion of Finland or Sweden is highly unlikely.

"Nobody would seriously argue that Russia is likely to invade Sweden or Finland if they apply for NATO membership because Russia clearly doesn't have the resources. At the moment it's not only tied down in Ukraine, but is putting on a really poor show in Ukraine. So now would not be the time for Russia to retaliate militarily against Sweden and or Finland," she said.

"What Russia is doing at the moment is conducting cyber attacks against Finland and running silly advertising campaigns against Sweden, alleging that various famous Swedes were Nazis. If that's the best they can do, I think it's a very good time to join NATO," she added.

Nedelcu explained that while Russian aggression in the intermediate period of Finland and Sweden's NATO ratification process is likely, allies of the countries could deploy some military assets in the Baltic Sea to send a political message to the Kremlin.

The United Kingdom has signed a deal to support Sweden if attacked and other Western countries are expected to follow suit with similar agreements with both Sweden and Finland.

Braw reiterated that irrespective of support from the UK and the US, being a member of NATO would present a formidable position against Russian threats.

"Whenever this war ends, Russia will lick its wounds and say, 'well, we had a Vietnam moment. We did really poorly and we embarrassed ourselves. Now we will reform our armed forces.' And they will. Maybe not as radically [as the United States] after the Vietnam War, but they'll emerge much better than they are now," Braw said.

"And so then Sweden, Finland and other countries in the region would really have to worry about potential Russian aggression and then would be a good time to be a member of NATO," she added.

Finland to apply for NATO membership