The defense committee in Finland's parliament said it favors Helsinki's bid for NATO membership. National security would be enhanced by the Article Five mutual defense pact in the treaty. 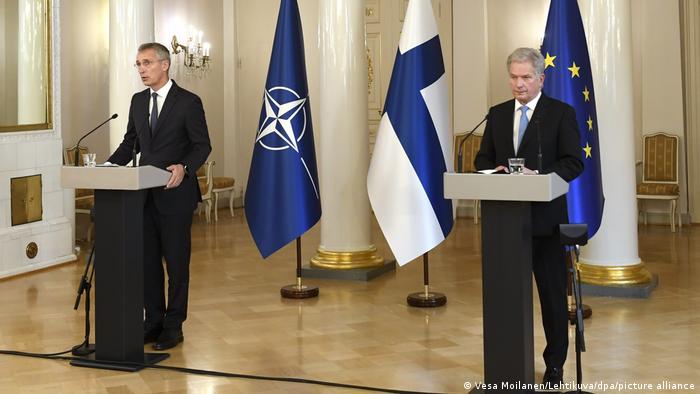 The defense committee of the Finnish parliament said Tuesday that it favors Helsinki's bid to join NATO to ensure the country's national security.

Finland shares a 1,340 kilometer-long (833 mile-long) border with Russia. Previously, Finland fought two wars with the Soviet Union during the course of World War II which ultimately resulted in a peace treaty, paying reparations, and the loss of a part of the eastern region of Karelia, nearly 10% of prewar Finnish territory, to Russia.

During the Cold War, Finland's policy of "active neutrality" was sometimes more critically dubbed "Finlandization," implying a soft touch towards the Soviet Union and the incorporation of Russia-friendly narratives into the education and political system.

Fear of Russia - Northeastern Europe on the edge

Nealy one month ago, the Finnish government presented a security policy analysis that highlighted the risks and opportunities afforded Finland were it to apply for NATO membership.

In total, 10 parliamentary committees in Finland will provide opinions and analysis on the debate over whether to join NATO. But the defense committee carries the most heft when it comes to security matters.

What have political leaders in Finland and Sweden said?

Also on Tuesday, Swedish Defense Minister Peter Hultqvist weighed in to say that should Sweden and Finland join NATO, the defense of northern Europe would be strengthened. Both already train and cooperate with the trans-Atlantic alliance.

"There is a before February 24 and an after," Hultqvist said.

He also told Swedish radio that should Finland and Sweden submit applications to join NATO, the two would be better positioned to conduct joint operations.

By Thursday, Finnish President Sauli Niinistö is expected to declare his stance on whether his country should join NATO. Finnish newspaper Iltalehti reports Prime Minister Sanna Marin will also announce whether she favors her country's membership in NATO on Thursday.