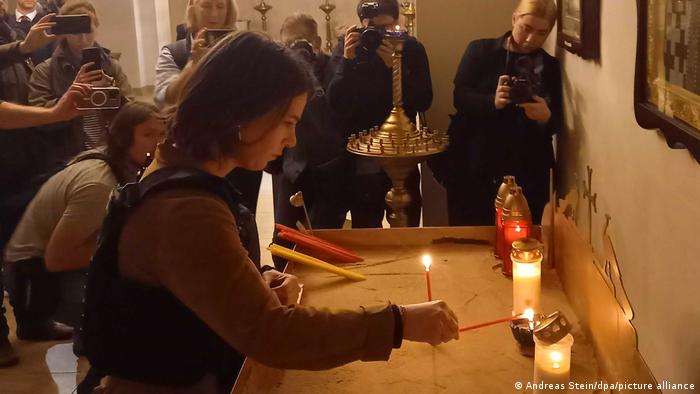 German Foreign Minister Annalena Baerbock arrived in Ukraine on Tuesday on the first trip there by a Cabinet member since the Russian invasion on February 24.

Her surprise visit comes as Germany continues to face criticism over its previous policy toward Russia, which has been widely perceived as placing economic interest over human rights concerns, notably in the area of energy exports.

However, Berlin is now giving considerable military support to Ukraine to help it fight off Russia's invasion in a radical break with former restrictions on sending arms to conflict regions.

What is Baerbock doing on her visit?

At the start of Baerbock's trip, she visited the city of Bucha near Kyiv, which has become notorious as the scene of alleged atrocities by Russian troops before they were forced to withdraw at the end of March.

She was accompanied by the Ukrainian prosecutor general, Iryna Venediktova, who has been overseeing the collection of information on allegations of rape, torture and other suspected war crimes by Russian forces. 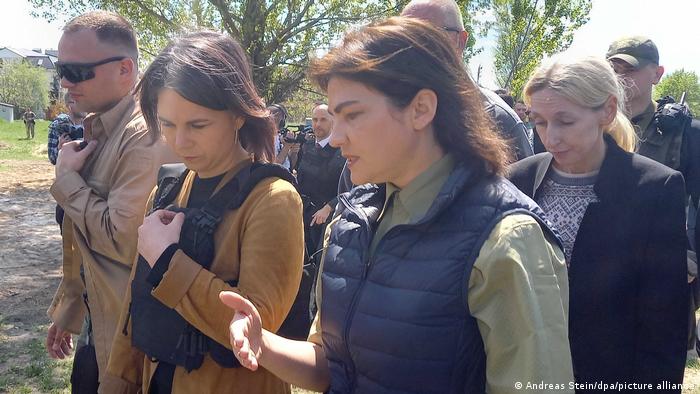 Baerbock was accompanied by Prosecutor General Iryna Venediktova (R.) during her Bucha visit

After hearing accounts of the atrocities, Baerbock said those responsible must be brought to justice.

"We owe this to the victims," she told reporters. "And those victims, as we can feel here so intensely, those victims could have been us," she added.

Baerbock: 'We must ensure that the perpetrators are held accountable'

Baerbock tweeted that "We will collect evidence as an international community. I have pledged Germany's complete support in investigating the war crimes to the Ukrainian prosecutor general, Iryna Venediktova: politically, financially and personnel-wise."

Later, while visiting the Kyiv suburb of Irpin, which has also suffered severe devastation, Baerbock expressed her deep-felt admiration for the courage shown by the Ukrainians in their fight against the invading Russian forces.

"You are a very brave country, and all that we can do is stand at your side," Baerbock said.

"Being the foreign minister of a country during peacetime is easy. But it is a completely different matter being a mayor during a war. You have my greatest respect," she told Irpin Mayor Oleksandr Markushyn. 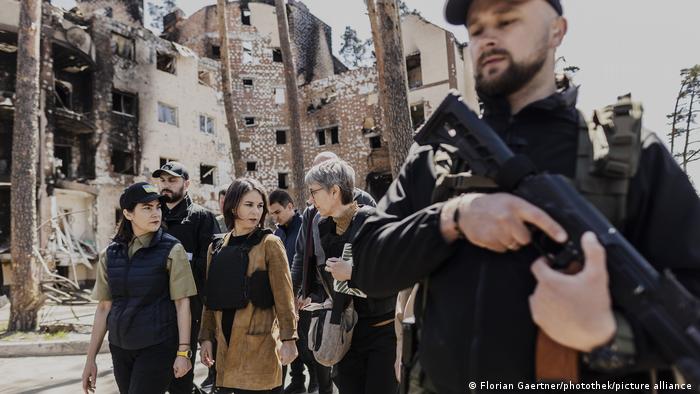 What has she said at her press conference?

In the afternoon, Baerbock announced the reopening the German Embassy in Kyiv, which has been closed since mid-February.

Speaking at a press conference with her Ukrainian counterpart, Dmytro Kuleba, she said the embassy would operate at first with a skeleton staff.

Baerbock also said that Ukraine could become a full member of the European Union but that there could be "no shortcuts." She said she was confident that the country would be granted "clear candidate status" but that there should be "no empty promises" about what happened after that.

The minister also announced that Germany would in future do completely without energy imports from Russia, which she described as an "aggressor."

She said Germany was reducing its dependence on Russia energy "to zero — and that will stay that way forever."

Baerbock also said that training would start in a few days to familiarize Ukrainian soldiers with the self-propelled armored howitzers that Germany is going to deliver to Ukraine in cooperation with the Netherlands.

Kuleba, in his turn, thanked Germany for its support.

He said there were still issued being discussed between Berlin and Kyiv but that he was sure that solutions could be found to all of them. 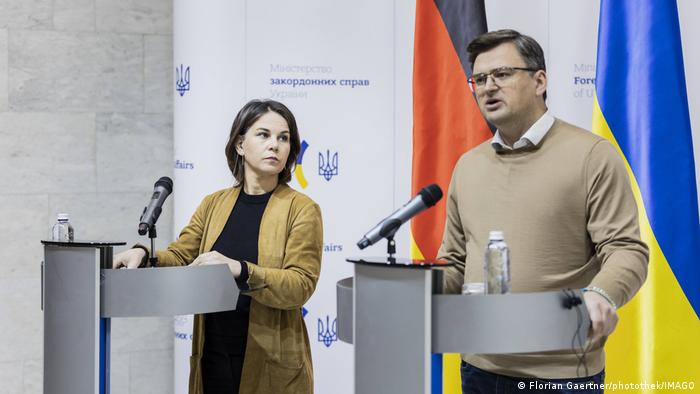 Baerbock's visit coincides with one by Dutch Foreign Minister Wopke Hoekstra, who arrived in Ukraine unannounced.

With Hoekstra, she held talks with Ukrainian President Volodymyr Zelenskyy on Tuesday afternoon following those with Kuleba.

"I can't convey how happy I am to be here today in a free Kyiv," Baerbock wrote on Twitter, sharing an image of her shaking Zelenskyy's hand. "The courage required on the side of the Ukrainians to ensure this is moving. My message is clear: Ukraine can count on our support, not just militarily, and not just today. We will be here just the same when this war is over, when Vladimir Putin will have failed in his goals, when Ukraine begins to plan its free future."

Germany and the Netherlands are coordinating closely over providing Ukraine with military assistance.

Ahead of those talks, a spokesman for Hoestra said the minister would "officially" reopen the Dutch Embassy in Kyiv, where some staff returned to work at the end of April.

Baerbock visited Ukraine once before as foreign minister in early February, before Russia's invasion began. Among other things, she toured the front lines in the Donbas region, which has been the scene of fighting between Moscow-backed separatists and government forces since 2014 and is now the focus of Russia's military operations.

Chancellor Olaf Scholz has so far declined to say when he intends to make a visit to Kyiv to meet with Ukrainian President Volodymyr Zelenskyy.

The diplomatic path for him to do so seems to have been cleared following a hiccup in Berlin-Kyiv relations after a perceived snub of Germany's head of state by the Ukrainian government.

German President Frank-Walter Steinmeier had planned to go to Kyiv with leaders from Poland, Latvia, Estonia, and Lithuania in mid-April. However, he was told not to come at short notice. The refusal was thought to have been linked to Steinmeier's policy of detente towards Russia when he served as German foreign minister.

Scholz said at the time that the situation had become a problem and that it could also prevent him from visiting Ukraine while the issue remained unresolved.

Following a phone call between Steinmeier and Zelenskyy last Thursday described by the Ukrainian president as a "good, constructive, important conversation," however, the spat appeared to be resolved.

According to Steinmeier's office, both he and Scholz have now been invited to Kyiv,

Last week, the Christian Democrat opposition leader Friedrich Merz visited Ukraine, with the trip widely seen as an opportunity to upstage Scholz, who is from the rival Social Democrats (SPD).