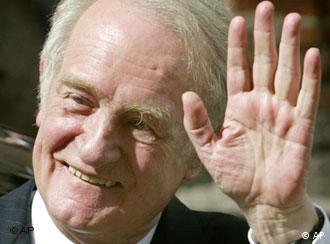 Johannes Rau suffered from a lengthy illness after leaving office

Rau was one of the Social Democratic Party's leading lights and dedicated nearly 50 years to serving the public as a political leader. For more than two decades he served as the premier of Germany's most populous state, North Rhine-Westphalia, before being named the country's eighth president in 1999.

During his five years in office, Rau won the respect of a large majority of his countrymen. He made a name for himself as the moral and ethical voice of the country in times of heated political discussion.

A president for all Germans

As Germany's president, he urged the nation to open up to foreigners. During the dispute over the country's first immigration law, Rau positioned himself above the political fray and worked to promote better understanding between Germans and foreigners.

As a guideline for his time in office, Rau once said, "I want to be the president for all Germans and the partner for all people who live and work here without a German passport.

Rau was succeeded as president by the former head of the
International Monetary Fund, Horst Köhler on June 30, 2004.