EC's Donald Tusk: 'There is no Europe without the rule of law'

Speaking at the EU summit in Romania, European Council President Donald Tusk has given a strong defense of the rule of law. He also said politicians who don't address climate and environmental issues have no future. 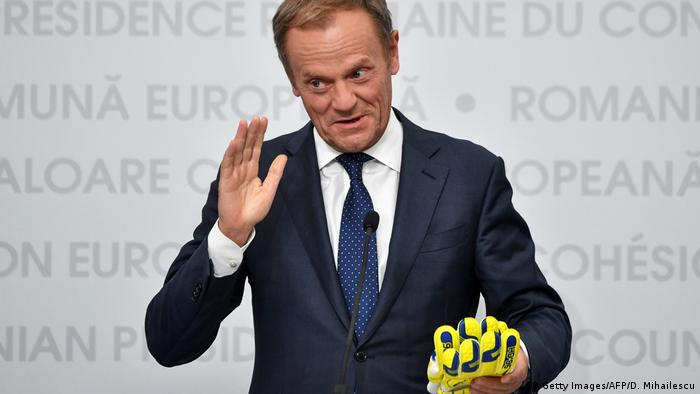 Speaking at a press conference at the end of an EU summit in Sibiu, Romania, on Thursday, European Council President Donald Tusk gave an energetic defense of the rule of law, not only in the bloc, but across the globe.

After addressing the need for swift decisions as a guarantee for effective EU institutions, Tusk promised that new leadership positions within the EU would be filled in June, immediately following European parliamentary elections. He also stressed the need for geographic, demographic, and gender balance in the Council's appointments.

Juncker says, 'things are not as bad as all that'

Tusk was joined by Romanian President Klaus Iohannis and European Commission President Jean-Claude Juncker, who underscored the progress that Europe was making in a number of areas, pointing out that unemployment and deficits have continued to fall across the bloc and that investments are up.

Juncker said, "Things are not perfect by any means, but they are not as bad as all that."

Impassioned defense of the rule of law

But it was in response to journalists' questions that Tusk shone as the most passionate of the three. Asked about European values, Tusk replied: "For all of us … or maybe, for almost all of us … the rule of law is the essence of our political activity, and it will also be at the center of our strategy agenda."

Read more: Merkel voices solidarity with Juncker, stops short of calling for Orban's Fidesz to be thrown out of EPP

He continued by saying, "There is no Europe without the rule of law, it is the quintessence of Europe as a political entity."

Addressing the issue of law in Romania and elsewhere, Tusk encouraged voters, saying, "If you are ready to defend the idea of the rule of law, then you can be optimistic, but only then."

He also stressed the importance of rule of law in allowing the EU to protect workers, unions, and businesses; something he said was a real issue for millions of people.

Frans Timmermans: The European Union is based on the rule of law

'No future' for politicians who don't act on climate change

The last issue the three men addressed at the press conference was the need to take decisive action on climate change. Juncker, much like German Chancellor Angela Merkel earlier in the day, shied away from France's calls to cut EU carbon emissions to zero by 2050.

Tusk, however, said that a younger generation of Europeans was much more united than member states on the need to act. He praised young students protesting in the streets and demanding action, calling it fresh and energetic.

He said protests were the right way forward, noting that politicians were sensitive to such popular pressure and warning his colleagues: "I am absolutely sure that there is no future for politicians without this sensitivity and imagination … If not tomorrow, for sure, the day after tomorrow, they will lose."