The president says the government's attempt to weaken anti-graft laws is "an assault against the justice system." He will refer the reforms to the Constitutional Court for review, asking that they "take their time." 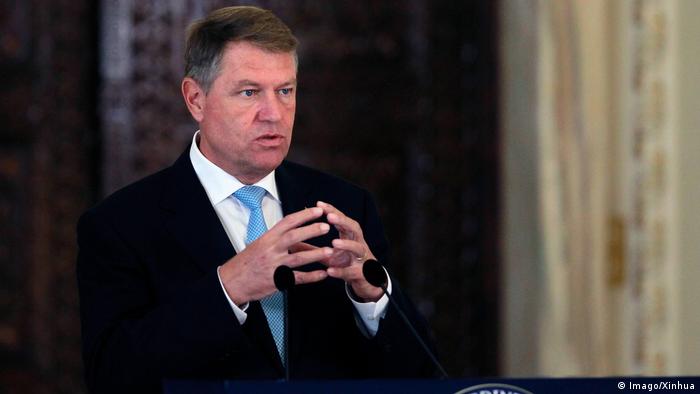 Romanian President Klaus Iohannis on Wednesday refused to approve a package of judicial reforms proposed by the government, which the European Commission has said threatens the judiciary's independence.

Center-right Iohannis said he would be sending the proposed reforms to the Constitutional Court and would seek the opinions of European experts.

The Social Democrats (PSD) used their parliamentary majority to push the three bills in the package through in December despite large street protests across the country and no impact assessment being done.

"These laws do not conform to the national constitutional framework nor to the relevant European standards," Iohannis said in a televised statement.

"This is why I've decided to send them to the Constitutional Court and to refer the matter to the Venice Commission," he added, referring to an advisory body of the Council of Europe composed of independent experts.

Iohannis said the package would weaken the status of prosecutors, risk obstructing justice and enact structures liable to intimidate magistrates.

The president often butts heads with the government and last week demanded that Prime Minister Viorica Dancila resign, after a heated discussion over a plan to move Romania's embassy in Israel to Jerusalem.

Iohannis acknowledged the "serious worries expressed by our international partners," referring to criticism of the package by the European Commission.

He urged the Constitutional Court judges to "take their time and work with" European experts and did not rule out asking the court to consider the laws again if he was not satisfied with their reasoning.

Iohannis said that the PSD government had "launched an assault against the justice system" by trying to weaken anti-corruption legislation after winning office in late 2016.

The European Commission has expressed concern over the controversial reforms, saying the package would result in Romania "backtracking" from previous commitments to combat corruption and organized crime in the country.

In a joint statement in January, European Commission President Jean-Claude Juncker and Vice President Frans Timmermans said they were "following the latest developments in Romania with concern."

The Council of Europe's anti-corruption body has also expressed concern that the reforms could have a "negative impact on efforts to fight corruption."

The reforms have put Romania in the same basket as EU states Poland and Hungary, which are also clashing with Brussels over rule of law issues.

The government had sought to remove anti-graft prosecutor Laura Kovesi, who has brought a record number of cases to trial. President Klaus Iohannis was not convinced by the justice minister's arguments. (16.04.2018)

According to a report in the British tabloid The Sun, whole families in Romania are working from home packing toys for Kinder eggs. The paper claims children are forced to do this work, but is the story really true? (25.11.2016)

The last queen of Romania has died at the age of 92. Anne of Bourbon-Parma and her husband Michael - the country's last monarch - lived for many years in exile, but remain popular with many in Romania. (01.08.2016)