Many ties link Germany and Romania, and now the Eastern European country is guest of honor at the Leipzig Book Fair. While corruption affects its developing economy, Romania's rich cultural scene offers reasons to hope. 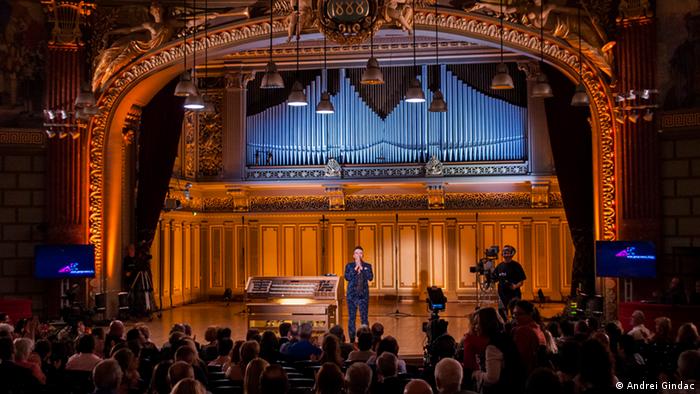 Let's be honest: How much do we know about Romania's cultural landscape? Or even about the current social and political situation of the country?

Three decades after the fall of dictator Nicolae Ceausescu in 1989, the headlines we read about Romania are typically negative, focusing on the country's problems. The positive news that reaches us once in a while is usually from the cultural world.

Read more: Romanian writer Dana Grigorcea on #Rezist — with the strawberry and the EU flag

In 2009, the Romanian-born German novelist Herta Müller received the Nobel Prize in Literature for her highly poetic works illustrating the destructive potential of totalitarian regimes. "One is either destroyed by adapting or for refusing to," Müller said during an award acceptance speech for a different prize in the German city of Solingen in 2014.

In the last 15 years, Romanian films have been showered with awards in Cannes, Venice, Locarno and Berlin. The Golden Bear at this year's Berlin International Film Festival went to the Romanian filmmaker Adina Pintilie for "Touch Me Not." 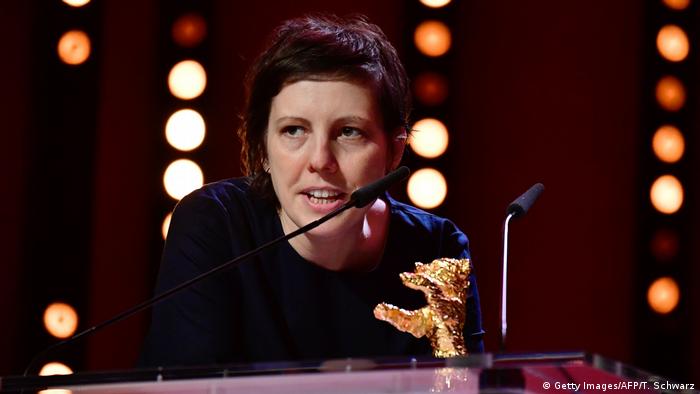 A growing number of renowned German directors have been staging productions in Romanian theaters and, the other way around, Romanianplays are also finding their way into the German-speaking world. One Romanian author and theater director of the younger generation who has been gaining international fame is Gianina Carbunariu. She has often worked with German theaters.

There are also many international festivals for theater and culture fans to discover in Romania, the main one being the Sibiu International Theater Festival, with Sibiu's charming medieval architecture as a backdrop. The festival, taking place for the 25th time this year from June 8 to 17, is one of the world's largest arts event, ranking alongside those in Edinburgh, Scotland and Avignon, France. Its program also includes many renowned international musicians, dancers and street artists. 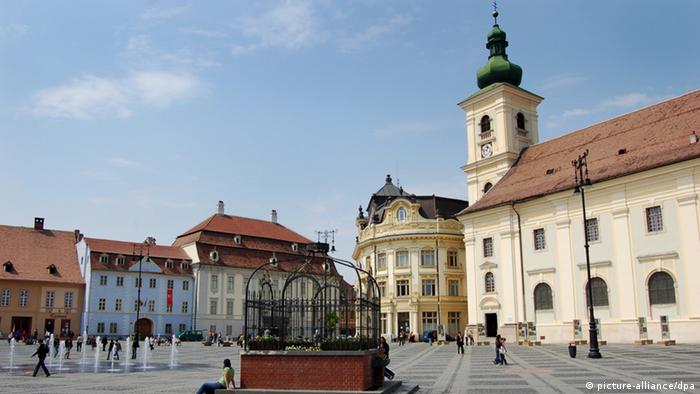 Sibiu has many well-preserved medieval buildings. Above, the city's market square.

4. The European Capital of Culture effect

The fact that Sibiu — a town with a population of nearly 150,000 people — was designated European Capital of Culture in 2007 certainly helped it develop as a cultural center.

Klaus Iohannis, then-mayor of the city and now president of the country (and of German descent), had recognized the driving force of culture as a factor of development. He had widely increased the city's budget for culture, while other municipalities — not only in Romania — were slashing their funding for the arts.The investment paid off: Sibiu has become a tourist and cultural magnet.

Many people know that Romania also has a strong tradition of German-language theater. Cities like Sibiu (known as Hermannstadt in German) and Timisoara (Temesewar) are soaked in the culture of former generations of German settlers, the Transylvanian Saxons and the Banat Swabians.

There are German schools throughout Transylvania and the Banat regions, as well as in the capital Bucharest. They were originally established for the children of the German minorities; following the exile of most Romanian Germans at the end of the 1980s, many Romanian families started sending their children to the numerous still-functioning schools.

There's a strong interest for German-language culture. Along with the theaters, there are different German newspapers, publishers and libraries in Romania.

Romania's capital is a mirror of its glorious and disrupted history. Splendid old buildings and impressive Orthodox churches that weren't destroyed under Ceausescu characterize the cityscape just as much as the Communist-era housing blocks that surround the city. Most of the old city center has recently been restored and many cafes, restaurants and beer gardens have opened their doors in that area.

In recent years, the Romanian metropolis has also become a major meeting place for music lovers. Every two years, the most renowned international classical musicians come to the Enescu Festival, dedicated to the famous Romanian composer George Enescu. "The mighty Salzburg festival now has a rival," wrote British newspaper The Guardian about the music festival in the Romanian capital, which has been directed by top-class conductors Vladimir Jurowski and Zubin Mehta since 2017. In 2019, the Enescu Festival will open with a concert by the Berlin Philharmonic Orchestra. Some of the festival's concerts take place in the Bucharest Atheneum (top photo). 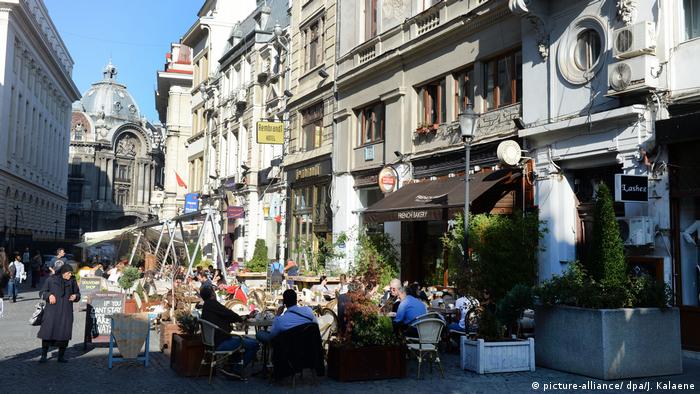 Cafes add to the vibrancy of Bucharest's historic city center

7. Migration from a Romanian perspective

Back to literature: In 1998, when Romania was also a guest country at the Leipzig Book Fair, people were just as curious as they are now to find out more about a country that's not often in the spotlight. What happened since?

In the first years after the fall of the Iron Curtain, Romanian literary works mainly dealt with topics such as the transition from communism to capitalism and from totalitarianism to democracy, the crimes of dictatorship, or the mass exodus of the German minority.

That has changed since. New works explore today's Romanian society, a young democracy visibly affected by the fact that many aspects of its history haven't been properly addressed and that various crimes remain unexplained  — including some from the post-communist period.

It is a society suffering under the enormous and constant emigration of its people — over four million Romanians currently live abroad — as well as widespread corruption. Children, especially those from rural areas, are raised by their grandparents or relatives because their parents need to work in another country. The most qualified young workers are quick to leave their home as well, hoping to find well-paid jobs elsewhere. It is also a society with deep political divisions. 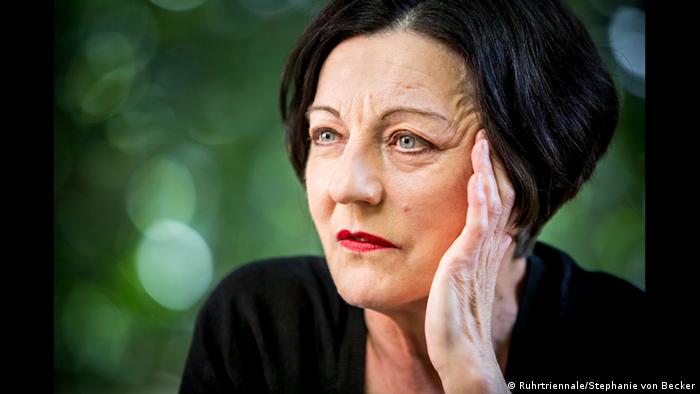 Author Herta Müller is from the Banat Swabian German minority

Nevertheless, there is also a lot of cheerfulness, hope and poetry in Romania, as well as young people who do not want to emigrate, who see their future in their home country and who are creating their destiny without resignation. That's another topic Romanian authors are writing about today.

The Leipzig Book Fair is set to witness exciting encounters between its different guest authors, including Nobel Laureate Herta Müller and many of Romania's established and promising young voices.

Talks between artists on different social and political issues related to Romania and Europe are part of the program of the book fair, which takes place from March 15-18.

How Gorbachev changed Russian culture, and carried my suitcase 31.08.2022

The Russian cultural scene owes its diversity and ability to survive to the perestroika period, writes DW editor Anastassia Boutsko, who recalls a very special tale.

Germany is wrestling with the legacy of author Karl May, whose fictional Native American hero, Winnetou, embodies the Germans' love affair with the Wild West.