In Romania thousands rally against proposal to water down corruption laws | News | DW | 26.11.2017

Thousands of people have marched across Romania to protest against plans to reduce the powers of the anti-corruption body. It is the second time this year that attempts to reform graft laws have provoked protests. 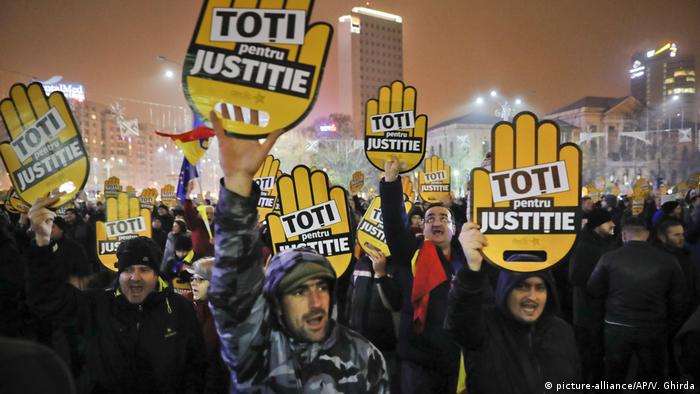 Thousands of people marched in the Romanian capital of Bucharest and other major cities on Sunday to protest the government's proposed changes to the judicial system, which critics say will weaken anti-corruption laws and allow political graft to go unpunished.

A joint statement issued by 40 Romanian civil society groups and two trade union federations accused the country of having been "taken over by a political mafia."

It follows a piece of proposed legislation introduced by the ruling Social Democrats (PSD) seeking to draw back powers from the country's respected anti-corruption directorate, the DNA. The body enjoys a high degree of independence and has been behind several probes targeting hundreds of public officials.

The most contested changes include reforming the inspection unit that oversees magistrates' conduct, the manner in which chief prosecutors are appointed and the president's right to veto candidates.

"Thieves, thieves," shouted thousands of protesters in front of the PSD's headquarters on Sunday. "We want justice, not corruption. PSD is the red plague," a reference to the party's communist roots.

Protesters and mounted police briefly scuffled in the Romanian capital, although there were no initial reports of serious violence or injuries.

Demonstrators also marched in oppositionto a proposed law that would shift social security taxes on the employee. The government says it will boost revenues but workers fear it could lead to lower wages.

It is the PSD's second attempt to water down anti-graft laws in Romania since the party came to power in December. In February, then-Prime Minister Sorin Grindeanu was forced to backtrack on altering anti-corruption laws after they provoked the largest protests in Romania since communist dictator Nicolae Ceausescu was toppled and executed in 1989.

That decree would have effectively protected dozens of public officials from prosecution for corruption. In reaction to legislation falling through, the PSD ejected Grindeanu from powerand from his own party.

The most recent set of proposals has come under rebuke from the European Commission, foreign diplomats and thousands of magistrates. The anti-corruption organizationTransparency International ranks Romania among the European Union's most corrupt states.

Another source of dismay for protesters is PSD head Liviu Dragnea, who is barred from office due to being convicted last year of vote rigging, but who is widely seen as being in charge.

Last week, prosecutors froze Dragnea's assets amid a probe into the misuse of €21 million ($25 million) in European Union funds.

The European Anti-Fraud Office, OLAF, said that money from the European Regional Development Fund for road construction was fraudulently paid to officials. It asked the government to recover the funds. Dragnea has denied the charges.