Liviu Dragnea has appeared before Romanian prosecutors amid claims he illicitly obtained EU funds. His party's attempts this year to decriminalize graft offenses led to Romania's biggest protests since the communist era. 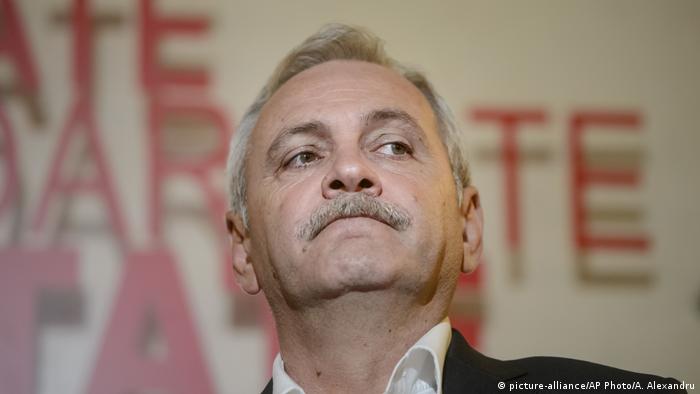 Romanian anti-corruption prosecutors said on Monday that they were investigating claims that the head of Romania's ruling Social Democrats (PSD), Liviu Dragnea, set up a "criminal group" that forged documents to illegally obtain European Union funds.

Dragnea, who is also the speaker of Romania's lower house, is alleged to have embezzled EU funds between 2001 and 2012 during his time as the head of Teleorman's county council in southern Romania. Eight others have also been implicated in the probe.

Where did the trail start?

Anti-graft prosecutors in Romania launched their investigation after the European Anti-Fraud Office (OLAF) last year uncovered evidence that some 21 million euros ($24.4 million) had been fraudulently paid to officials from the European Regional Development Fund.

Investigators said the trail leads to the award of road repair contracts in Teleorman, most of which went to road construction firm Tel Drum, which was controlled by Dragnea county council. According to prosecutors, Teldrum won many public contracts, often without tenders or by benefiting from confidential information that helped it beat other bidders.

After appearing before prosecutors on Monday, Dragnea denied any wrongdoing, telling the press that the allegations against him were politically motivated and that he would answer calls from the opposition for his resignation.

What power does Dragnea have?

Dragnea legal woes have clouded Romania's ruling Social Democrats since the party came to power in December last year. In April 2016 he was found guilty of electoral fraud and handed a two-year suspended sentence, barring him from becoming prime minister. He also faces abuse of office charges for allegedly arranging for PSD staff to be paid by the Child Protection Office without working there.

In October the PSD submitted a new bill before the Romania's parliament seeking to revamp the country's judiciary. The bill once again prompted mass protests, while the European Commission and Romania's very own president warned that it could place the country's justice system under political control.