Opinion: A theater of the absurd in Bucharest | Europe | News and current affairs from around the continent | DW | 22.06.2017

Opinion: A theater of the absurd in Bucharest

The governing coalition in Romania has ousted its own prime minister through a no-confidence vote. But the country's domestic political crisis is not likely to end anytime soon, writes DW's Robert Schwartz. 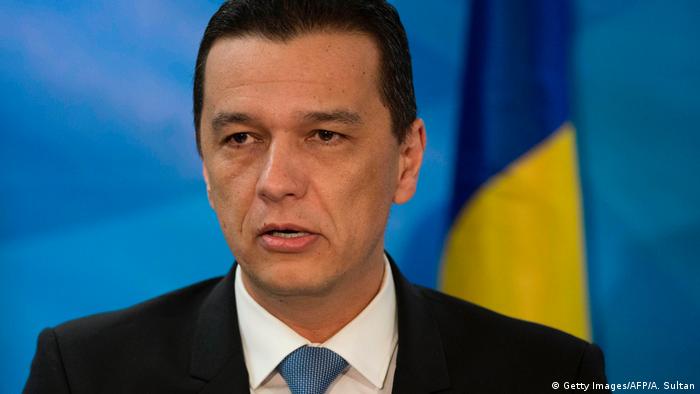 Social democratic Prime Minister Sorin Grindeanu's small camp of loyalists could barely hide their embarrassment following the recent vote in parliament. Only hours earlier he could be seen smiling confidently, convinced of his victory against party boss Liviu Dragnea. But the story didn't end quite as hoped for the "dissident" Grindeanu.

When Grindeanu was appointed prime minister in January following the stellar election win by the Social Democratic Party (PSD), it was clear that he was expected to be little more than Dragnea's puppet.

Dragnea himself was forbidden by law to take office following a conviction for electoral fraud and a trial over his misuse of office. But he had a simple solution, hoisting political loyalists and the pseudo-liberal junior coalition partner ALDE into the cabinet while the actual business of running the government would be conducted through PSD officials.

It was when Dragnea sought to use his authority to soften corruption laws that the split came. Grindeanu didn't want to play anymore, as some of the largest mass demonstrations since the end of the Cold War took to the streets, and the suddenly the courageous prime minister saw his chance.

Many deputies within the PSD were dissatisfied with the inner-party dictatorship under Dragnea, but most lacked the courage to stand up to him. Grindeanu did and was promptly punished.

But the deposed prime minister is not completely undeserving of his downfall. When the coalition pulled their ministers from the cabinet in an effort to force him to resign, he sought help and appointed a new general secretary from his shrunken government: Victor Ponta, the deposed former PSD chief and ex-prime minister who had been long compromised by a plagiarism scandal.

And it's worth saying again: Grindeanu is nothing but a puppet of Ponta's cronies. Everything turned out to be a fierce battle for influence between rivals within the ranks of the PSD. Conspiracy theories and mutual accusations regarding the political interference of the secret services and Moscow were batted back and forth.

What now after this theater of the absurd? The emboldened Dragnea has free rein to send a new, devoted team to the Victoria palace. Romanian President Klaus Iohannis has delivered an unmistakable signal to him that he must appoint only someone with political and moral integrity. Dragnea will surely respect this - if only for appearance's sake. Should he not, following the repudiation of yet another candidate, Iohannis has to dissolve the parliament and call for new elections.

The coalition will be careful not to take this risk. Too many of the current parliamentarians have problems with the judiciary and would have to appear in court if they lost their immunity. Who would do this voluntarily in a party that isn't exactly known for fighting corruption?

More turmoil on the horizon

The result will be a new puppet government, only this time with a very carefully chosen prime minister who doesn't go behind his patron Dragnea's back. Domestic politics will calm down in the short term, but it will be a deceptive calm.

Dragnea's determination to weaken the judiciary and the rule of law, in order to secure impunity for himself and his cronies, does not bode well for the country. The Constitutional Court is already stacked with PSD-loyal judges, and a new, willing justice minister would serve as yet another instrument for Dragnea to further his agenda.

A democratic cooperation with the president - a cohabitation if you like - would be impossible under these circumstances. Klaus Iohannis sees himself as the guarantor of the independent judiciary. At the beginning of the year he had joined the hundreds of thousands of demonstrators who had taken to the streets to defend the constitutional state. The president made clear during his recent visit to Berlin that he wouldn't deviate from this position even a millimeter.

And there lies the core problem for Romania: While the head of state racks up foreign-policy achievements in Berlin, Brussels and Washington and works to integrate Bucharest more closely with the EU and NATO, the political parties aren't in the position to guarantee domestic stability. The liberal and conservative opposition are too weak to fight against the coalition. Additionally, they are too concerned with themselves and their constantly delayed inner-party reforms to offer a credible alternative to disappointed voters.

It's only a question of time when the ongoing domestic political crisis will flare up again. And once again it will be up to ordinary Romanians to make it happen. It's just a question of whether they still have the strength and desire to do so.