Romania's Social Democratic Party has submitted a no-confidence vote against Sorin Grindeanu, their own prime minister. Grindeanu, who is accused of failing to fulfill the party's policies, has refused to step down. 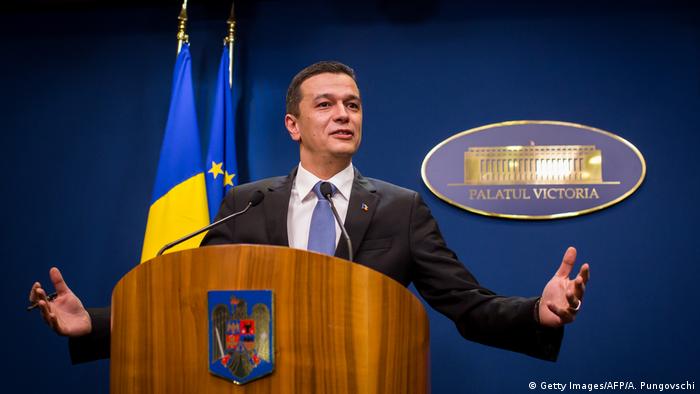 Romania's ruling Social Democratic Party (PSD) accused its own government of "contempt for democratic rules... immaturity and political irresponsibility," as it submitted a no-confidence vote before the parliament on Sunday.

The PSD withdrew its support for Prime Minister Sorin Grindeanu and his cabinet on Wednesday following a performance review that found the government had failed to fulfill an ambitious policy and economic reform program.

However, Grindeanu, who has been expelled by his party, rebuked the findings of the performance review, maintaining that it showed his cabinet had failed to introduce measures that had deadlines for 2018 or later. His refusal to step down deepened internal rifts within the PSD and sparked a political crisis.

Romanians get referendum on corruption amid protests

If the no-confidence motion passes, the prime minister will be removed from office and the PSD will be allowed to nominate a replacement that will need the approval of president Klaus Iohannis.

The no-confidence vote, which is scheduled for Wednesday, needs 233 votes out of a total of 465 to remove the government. The PSD and its junior coalition ally, ALDE, have enough seats for the motion to succeed, although several PSD could cast their ballots in support of Grindeanu.

However, regardless of the outcome, the ordeal may have inflicted irreversible damage to the PSD's image. Former Prime Minister Victor Ponta, an ally of Grindeanu, described the no-confidence vote as "an atomic war between the Social Democrats and the Social Democrats," adding that it would only empower Romania's center-right president, who himself has the authority to appoint a prime minister with parliament's approval.

Observers have attested that PSD has sought to dismiss Grindeanu for failing to pass  contested legislation earlier this year that would have relaxed anti-corruption laws.

At stake could be the political future of PSD leader Liviu Dragnea, who holds tight control over the party. Dragnea received a two-year suspended sentence for voter fraud in 2016 and also faces charges of abuse of power. The charges prevent him from running for public office. However, had the corruption legislation passed, it would have allowed Dragnea to run for prime minister.

"Grindeanu's removal seems to be at the forefront of an effort by the ruling coalition to relaunch a drive to weaken the anti-corruption fight," commentator Mircea Marian told the Reuters news agency.

The government's move to decriminalize a number of corruption offenses shortly after taking office January was foiled after demonstrators took to the streets in what were the largest mass protests seen since the fall of the Communist regime in 1989.

PSD lawmakers, meanwhile, rejected that the no-confidence motion was about relaxing laws for political gain.

"This is a vote against a pseudo-government, one without any legitimacy," PSD senator Mihai Fifor told parliament on Sunday. "A government that believes it can exert power in its own name."