Romania: ′The street has the role of the opposition′ | Europe| News and current affairs from around the continent | DW | 30.01.2017

Romania: 'The street has the role of the opposition'

Tens of thousands of people have protested in Romania against government plans to ease anti-corruption laws. Romanian journalist Cristian Stefanescu explains what they have achieved so far. 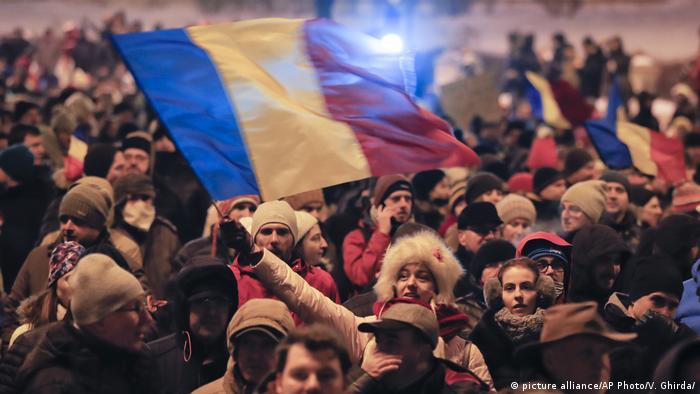 DW: Around 50,000 people protested in the capital Bucharest on Sunday, while tens of thousands took to the streets in several other Romanian towns. What motivated them, and why did you also join the protests?

Cristian Stefanescu: For almost three decades, the politicians governing Romania have stolen as much as possible - often with the help of a network including representatives and successors of the former communist party and the former dictator [Nicolae] Ceausescu's secret service Securitate. These politicians have undermined justice and the meaning of the state of law, governing with the aim of hiding their own corruption. International pressure was the only strong incentive for the judiciary to move on it. Slowly, but steadily, investigations started.

But a party dominated by corruption suspects - afraid of losing their illegally attained wealth - or even politicians who were declared guilty of corruption won the parliamentary elections at the end of 2016. The Social Democratic Party and their smaller coalition partner, the liberal party ALDE, have a majority that permits them to modify the existing legislation.

It's hard to imagine that it can happen in 21st century Europe: This majority is preparing an amnesty law that would wash away the sins of corrupt politicians and let them keep the money and possessions obtained illegally. The fear of being forced to pay for their deeds is so great that they are willing to risk not only the fate of their party - but also that of the country.

In the absence of a strong parliamentary opposition that can keep pace with all of this, the people lost their patience and took to the streets to show politicians that laws should not be in the service of those stealing public money.

What unites the demonstrators?

The crowds on the streets are very mixed. Some - including myself - consider that the result of the elections (in December 2016) should be respected and that those in power should do what they promised to their voters, but without punishing the others who also contribute to the public budget with their taxes and who should benefit from good governance.

On the other hand, there are those who want Prime Minister Sorin Grindeanu to step down - along with the other ministers who have tried to modify laws without public consultation, thereby despising the state of law. All the protestors share a feeling of anger and despair caused by corruption. 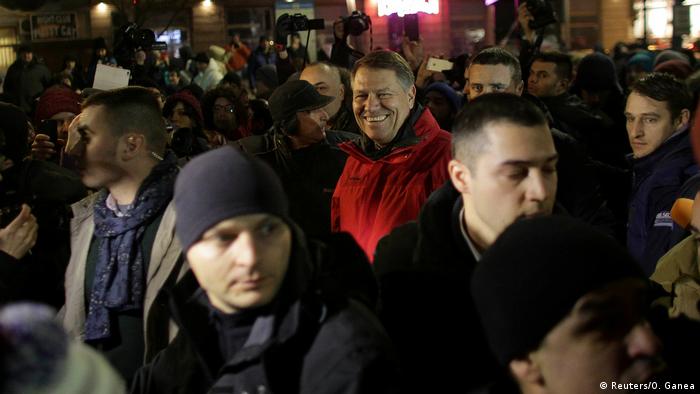 What have the protestors achieved up to now?

The changes to the law have at least been postponed. Furthermore, the ministry of justice has organized some kind of public debate over this issue - although it is purely consultative: The ministry can ignore any recommendation that the representatives of civil society or other groups suggest. At the moment, the street has taken the role of the opposition.

After Romania's President Klaus Iohannis took part in the protests on January 22, Social Democrat leader Liviu Dragnea spoke of an attempted "coup." What is your reaction to this?

President Klaus Iohannis shouldn't have taken part in the protest. The demonstrators protested against a weakening of the anti-corruption legislation, it wasn't a political fight.

For years, demonstrators in Romania have been regarded as an easily manipulated mass. Several TV channels, intoxicated by a language of hate, have repeated again and again that they were bought. Some of them even spoke of fixed prices for each participating adult, child and even dog!

There is no difference between the manipulations of these TV channels and Liviu Dragnea's accusations that he has repeated on these same channels. President Iohannis knows exactly who he has to deal with regarding the parliament majority. And he should have known that his presence at the mass protest is grist to the mill of manipulation. Maybe he scored points on the political level, but it was a mistake for the fight against corruption.

What do you think about the president's proposal to organize a referendum on the controversial legislation?

What happens if, like in other parts of Europe, people won't show up at a referendum? Will many claim that the citizens simply don't care about the issue of corruption? Liviu Dragnea himself claimed, after local elections won by his Social Democrats, that the voters don't really care about a mayor's judicial record. The proof is very clear: About one quarter of all the mayors of Romanian towns have legal problems. Some of them were even elected while still serving a jail sentence. In a political landscape dominated by lies and manipulation, it will be extremely difficult to send a clear anti-corruption-message.

Cristian Stefanescu is a Romanian journalist working for the radio station DigiFM in Bucharest.

Tens of thousands of Romanians have protested a government plan to decriminalize abuse of power crimes and grant pardons to some convicts. Justice Minister Florin Lordache is to hold public consultations on Monday. (29.01.2017)

Balkan states in the grips of corruption

The principles of judicial independence, the fight against corruption and respect for the rule of law are popular themes in political speeches in the Balkans. However, reality is something altogether different. (25.01.2017)