Tens of thousands of Romanians have protested a government plan to decriminalize abuse of power crimes and grant pardons to some convicts. Justice Minister Florin Lordache is to hold public consultations on Monday. 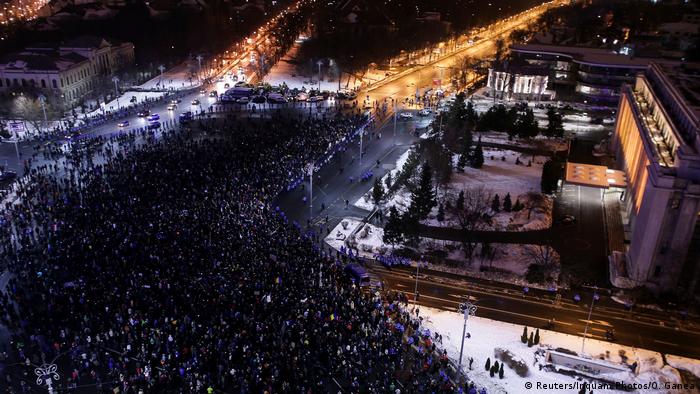 Romanian authorities said as many as 50,000 people took part in the largest rally in Bucharest on Sunday. Thousands also protested in 22 other Romanian cities, including Cluj and Timosoara.

Romania's Social Democrat government plan ease anticorruption laws to decriminalize abuse of power acts, which result in less than about 46,600 euros ($47,800) in damages.

Critics claim it is a bid by Prime Minister Sorin Grindeanu to protect Social Democrat (PSD) chairman Liviu Dragnea, who is facing legal proceedings for about half that amount.

The plan, including pardons for convicts sentenced to less than five years and reduced sentences for prisoners over 60, would result in the release of at least 2,500 convicts, ostensibly to ease prison overcrowding.

In Bucharest, protestors rallied in the main Piata Universitatii square, outside the justice ministry, and government headquarters.

The proposals have been criticized by President Klaus Iohannis, a top panel of magistrates, civil rights groups and diplomats.

Recalling the 1989 anti-communist revolution in Bucharest, actress Adriana Moca said: "I am here because I can't believe that 27 years have passed and find myself in the same place in the same square."

Justice Minister Florin Iordache was scheduled to hold a round of public consultations over he plan.