Opinion: What's next for Romania?

The Romanian government has repealed its controversial corruption ordinance. Hundreds of thousands of people have been protesting peacefully for days. DW's Robert Schwarz believes they want more than just the repeal. 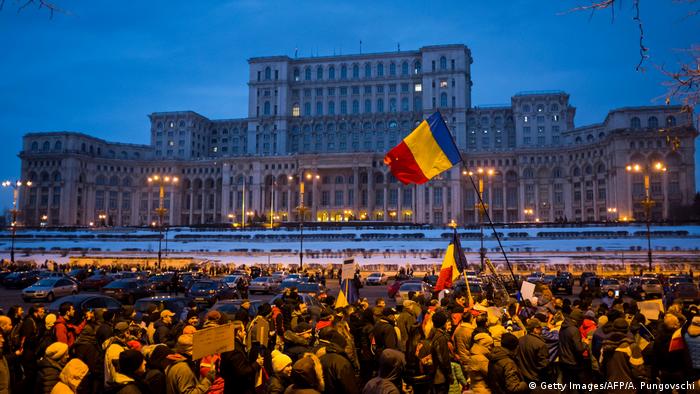 Several hundred thousand people were out on the streets again all over Romania on Saturday, when the country's prime minister, Sorin Grindeanu, announced on prime-time television that his government would be overturning its emergency ordinance on changes to the penal code regarding corruption. Politicians from the government camp had been indicating all day that the decree would be annulled. However, this past week has seen such widespread loss of faith in the ruling Social Democrats that even that has failed to have the desired effect.

In a short declaration to the press, Grindeanu stressed that the decision was intended to defuse the tense situation. His government then held an emergency meeting on Sunday and repealed the corruption decree. But more than a million people are expected to take part in further protests on Sunday.

The premier's uncertain manner and his ambiguous messages are not at all calculated to calm the mood on the street. People started out demonstrating against the emergency ordinance, which would make corruption partially exempt from punishment. Now, though, they're calling on the government to resign. There haven't been mass protests like these in Romania since the fall of the communist regime 27 years ago.

To the many people who have been demonstrating now for almost a week - young and old, families with children and dogs - the government's sudden capitulation is suspicious. Only the previous day, the Social Democrat leader, Liviu Dragnea, had ruled out any concessions whatsoever. Dragnea, who pulls the strings of this puppet government, would have been the first to benefit from the changes in the penal code. The current litigation against him for abuse of office would have come to nothing.

Civil society doesn't trust this peace offering, and further protests have been announced. Criticism also came from Brussels and some of the member states, but European social democratic parties – including Germany's – have failed to distance themselves clearly from the evident overthrowing of the constitutional state: a very bad sign that indicates a false understanding of party political solidarity.

Romania's civil society, on the other hand, has come of age this winter. Its peaceful, persistent and clear rebellion against corruption and despotism is deserving of respect. No longer does it allow itself to be fobbed off with a few crumbs and empty promises. It has not yet won the fight against the ailing political system. But the nationwide protests are an unmistakable sign that politicians are coming under closer scrutiny. In Romania, too, political parties must get used to the fact that, even after a clear election win, they cannot place themselves above the law.

Have something to say? You can leave a comment below. The thread automatically closes after 24 hours.

After days of protests, Romania's government has said it plans to repeal a controversial decree that critics said legalized some forms of corruption. Hundreds of thousands turned out on the streets to protest the law. (04.02.2017)