The EU has urged Romania to "rethink" its controversial judicial reforms package, adding that it is monitoring the situation "with concern." Critics warn the new laws seek to weaken Romania's anti-corruption body. 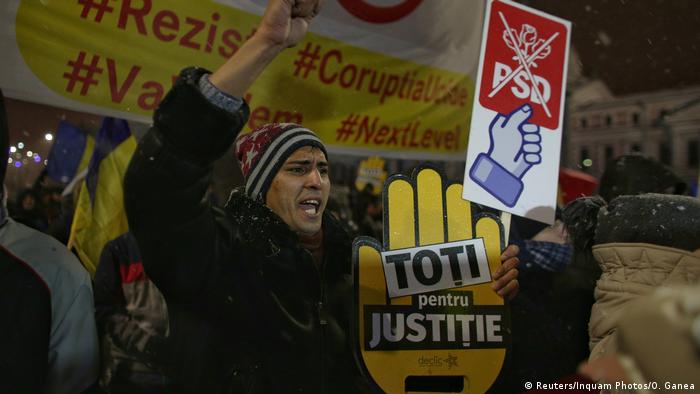 The European Union's executive body on Wednesday warned the Romanian government that its controversial judicial reform package would see the country "backtracking" from previous commitments to fight against corruption and organized crime.

In a joint statement, European Commission chief Jean-Claude Juncker and Vice President Frans Timmermans said they were "following the latest developments in Romania with concern."

"The independence of Romania's judicial system and its capacity to fight corruption effectively are essential cornerstones of a strong Romania in the European Union," they said. "The Commission again warns against backtracking and will look thoroughly at the final amendments to the justice law, the criminal codes and laws on conflict of interest and corruption."

It marks the first time that Brussels has formally rebuked the judicial situation in Romania. The country now joins EU states Poland and Hungary as those at loggerheads with Brussels over rule of law issues.

In November, the Commission warned in its annual report on Romania that the county was in danger of failing on anti-graft commitments made back when it joined the EU in 2007. The country's judicial independence was earmarked as a "persistent source of concern" in the report.

Juncker and Timmermans accused the Romanian government on Wednesday of having "done nothing" to address those worries.

What judicial reforms is the Romanian government proposing?

Critics of the package have warned the proposed legislation seeks to significantly curb the powers of Romania's anti-corruption authority, known as DNA, thereby making it harder to prosecute crime and high-level corruption.

Last month, Romania's ruling Social Democrats (PSD) also put forward a draft bill proposing that abuse of office offenses that cause financial damage of less than €200,000 ($237,100) should no longer be legally punishable.

Other proposed changes include lower sentences for bribery, decriminalizing taking bribes for someone other than the accused and decriminalizing the use of political office to obtain sexual favors.

The legislation was passed by lawmakers but still requires the signature of President Klaus Iohannis.

The PSD insists that the bill is meant to improve the efficiency of the judiciary and that it remains committed to the rule of law. However, many also view the package as part of wider strategy to allow PSD chief Liviu Dragnea to hold public office again. Dragnea faces charges of voter fraud and abuse of power, barring him from holding public office. He was already found guilty of voter fraud in April 2016 and is under investigation of misappropriation of EU funds.

The proposed reforms have also triggered multiples protests across Romania, most recently on Saturday when some 30,000 demonstrators took to the streets of Bucharest.

The light that penetrates corruption