The EU was wrong to stay silent ahead of the 2016 Brexit referendum, Jean-Claude Juncker said as he prepares to step down. Being vocal would have 'destroyed' campaigners' lies. He called for a high turnout in May. 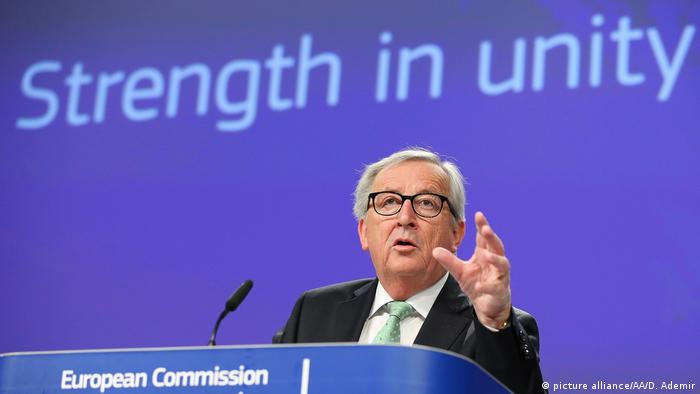 President of the European Commission since 2014, Jean-Claude Juncker, thinks his biggest mistake as the EU's chief executive was to listen to then-Prime Minister David Cameron's request to stay silent while Brexit campaigners told "lies" ahead of Britain's 2016 referendum.

Juncker told an end-of-tenure Brussels news conference Tuesday that he and the EU institutions should have ignored the advice: "I was wrong to be silent at an important moment," Juncker said, adding that his mistake had also been to "listen too carefully" to Cameron.

"It was a mistake not to intervene and not to interfere because we would have been the only ones to destroy the lies that were circulated," added Juncker.

The referendum produced a narrow 52% vote in favor of Brexit over 48% for Remain, although the latest date for the UK to leave has been put back to October as Westminster tries to gain support for its withdrawal agreement.

A message for May voters

In a plea ahead of the May 23-26 European Parliament elections, Juncker urged EU voters to ask themselves what Europe would look like if extremists were elected during what he termed the "largest transnational election everywhere."

Surveys suggest the current the Strasbourg parliament's majority-holding conservatives and center-left social democrats will lose some support while populists will gain seats.

In defense of President of the European Council Donald Tusk, Juncker described a Polish bid to compare Tusk to Hitler and Stalin as "totally unacceptable, I have to say highly disgusting."

On trade tensions between the United States and China, Juncker warned that this was a "major part" of weakening appetite among investors to commit their funds "on both sides of the Atlantic."

Commission staff were, however, in almost daily contact with the White House, Juncker said, and in a plaudit for President Donald Trump said: "we can trust the president of the US when it comes to trade relations between the US and EU."

Angela Merkel will bid farewell to the chancellor's office in Berlin in 2021. The outgoing president of the European Commission thinks she is "a complete and endearing work of art" who would do well in Brussels. (20.04.2019)

Brexit deal: What Germany wants, what Theresa May can get

UK Prime Minister Theresa May has until October 31 to try and save the Brexit deal. DW outlines where Germany stands on the issue. It has a vested interest in avoiding a hard Brexit but an even bigger one in a strong EU. (11.04.2019)