Brexit deal: What Germany wants, what Theresa May can get | Germany | News and in-depth reporting from Berlin and beyond | DW | 11.04.2019

Brexit deal: What Germany wants, what Theresa May can get

UK Prime Minister Theresa May has until October 31 to try and save the Brexit deal. DW outlines where Germany stands on the issue. It has a vested interest in avoiding a hard Brexit but an even bigger one in a strong EU. 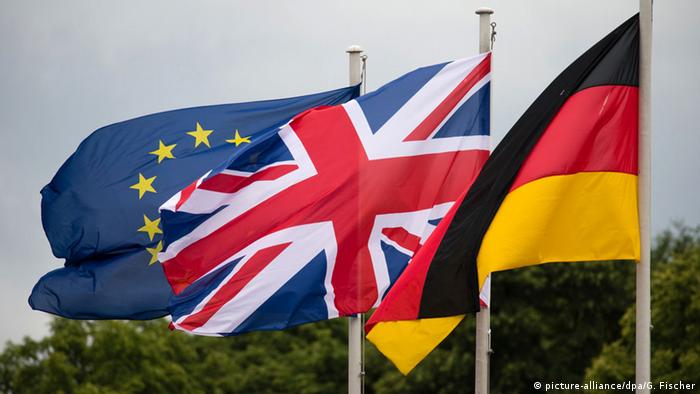 Together with France, Germany is the main proponent and driving force of the European Union. Thus the primary principle in Berlin's Brexit policy has been to prioritize the welfare of the bloc. The EU, and its chief negotiator Michel Barnier, speaks on behalf of all member states collectively. Individual European nations have thus far forgone bilateral talks with the United Kingdom.

With the EU holding remarkably solid on the issue, it was always very unlikely that May would be able to extract any concessions from Chancellor Angela Merkel. After a December meeting, the German leader said that negotiations "would not be repoened," and this line has continued into 2019.

Germany's position is identical to the EU's in that the deal agreed upon in November 2018 is the only one possible and should be implemented. An extension granted to May giving her until October 31 to get the deal ratified by the British Parliament has not changed the EU's view that the existing deal is the final offer.

You could buy a lot of orchards if you had a euro for every time a German politician has reassured the public that Britain will not be allowed to "cherry pick" the benefits of association with the EU without bearing any of the responsibilities.

Germany fears that if that were allowed to happen, other nations would be encouraged to quit the bloc in hopes of reaching a more favorable deal. As Merkel has repeatedly put it, "No third-party state can be better off than a member."

The backstop is needed

The EU has made it clear there can be no hard border between Northern Ireland and the Republic of Ireland. Merkel has reiterated the principle that this is non-negotiable. If that means the former stays in the customs and trade union despite being part of the UK, so be it. Merkel is all too aware of this paradox as she showed in a speech to business leaders in late November.

One of the central issues in Brexit negotiations is how much the UK will be required to pay as a "divorce bill" to settle its liabilities and obligations when it leaves the bloc. The agreement reached in November calls for Britain to fork over almost €41.5 billion ($47.2 billion). Germany will insist on this, if Britain wants a deal to avoiding crashing out of the EU.

For the time being, the official line in Berlin is that the Brexit must be "orderly" — a term that has almost displaced cherry picking as German politicians go-to cliche on the issue. But it should be remembered that Germany remains opposed to Britain leaving the EU at all. The European Court of Justice ruled in early December that Britain can unilaterally cancel the decision to leave. There may be hopes in Germany that the UK will decide to do precisely that, even if it spells the end of May's tenure as prime minister — and even if no one would come out and say so at the moment.

Although most of the attention during the long months of Brexit talks has focused on the Frenchman Barnier, the woman from the EU most responsible for the final form of the Brexit deal is his German deputy Sabine Weyand. Bloomberg has called her "the real force behind the Brexit talks." She undoubtedly doesn't want all her hard work to go for nothing and likely wields considerable power behind the scenes.

Germans in the UK

Although Germany and the EU have no interest in renegotiating the deal reached in November, for a variety of reasons they don't want Britain simply to crash out of the bloc on October 31. That, for instance, might have consequences for the 100,000 German nationals permanently residing in Britain. Under the deal, the vast majority of them would be allowed to stay in the UK, and right from the beginning of the Brexit negotiations, Merkel stressed that their fate was one of Germany's main concerns.

Business leaders hate all the uncertainty surrounding the Brexit deal and may have the most to fear from a hard Brexit scenario. And no one stands to lose out more than German business people if that scenario comes to pass. The UK is the fourth-largest buyer of German exports, worth almost €85.5 billion per year. Germany runs an annual trade surplus of €48.6 billion with Britain. So business representatives will be exerting pressure on Berlin to ensure that a Brexit deal, and not a hard Brexit, goes through.

German Chancellor Angela Merkel has called the EU-Brexit deal a "diplomatic work of art," while UK Prime Minister Theresa May is ready to fight for it back home. Bernd Riegert reports from Brussels. (25.11.2018)

British PM Theresa May is headed to Berlin to meet with Chancellor Angela Merkel in an attempt to salvage her Brexit deal. The last-minute Europe trip comes a day after she delayed a parliamentary vote on the draft deal. (11.12.2018)

UK Prime Minister Theresa May has set off on a whistle-stop tour of Europe, after postponing a parliamentary vote on the Brexit deal. May had been faced with the possibility of a crushing defeat on the bill. (11.12.2018)