Felix Klein suggested the decoration for Campino's stance against German rappers Kollegah and Farid Bang at the Echo Awards. Campino said the rappers "crossed a red line" with their reference to Auschwitz inmates. 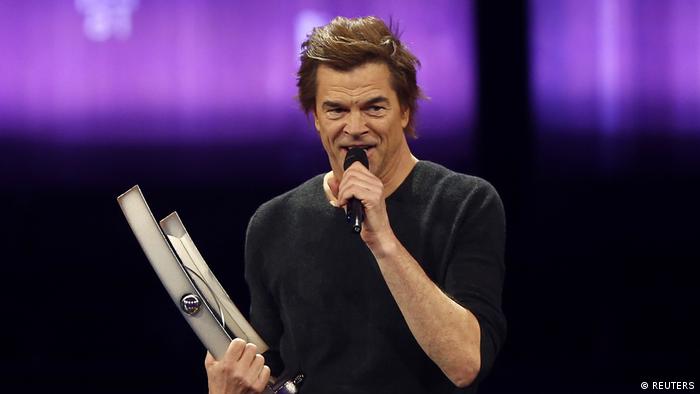 Germany's newly appointed anti-Semitism commissioner, Felix Klein, said on Monday that veteran German rocker Campino should receive the Order of Merit for services to the nation, for his stance on anti-Semitism during this year's controversial Echo Awards.

Campino is co-founder and lead singer of the German band Die Toten Hosen, a legendary punk-rock band that has been active since 1982.

The Order of Merit is the only decoration that the German government bestows upon both foreigners and nationals for "achievements in the political, economic, social or intellectual realm and for all kinds of outstanding services to the nation in the field of social, charitable or philanthropic work."

On April 14, the 55-year-old Campino spoke at the Echo Awards, Germany's most important music awards ceremony, against the lyrics of rap duo Kollegah and Farid Bang.

Campino received a standing ovation during his remarks, when he said that although provocation was an important creative tool, a line was crossed when it became misogynous, homophobic, right-wing extremist or anti-Semitic.

Read more: At Germany's Echo music awards it's record sales — and not artistic merit — that count

The controversy began when Kollegah and Farid Bang were criticized for the line "my body is more defined than those of Auschwitz inmates" in their song "0815." The rap duo apologized for the lyrics and later announced they would visit the Auchwitz-Birkenau concentration camp.

Kollegah and Bang were nominated and subsequently won  "Best of Hip-Hop/Urban, National" album. The Echo Awards maintained the nomination and their inclusion in the show citing freedom of artistic expression. But on April 25, the backlash and protests from other artists about the rap duo's appearance in the awards show prompted Germany's music industry association BVMI to end the awards ceremony in its current form.

Klein referred to the Echo Awards as a "collective failure" and saw the inclusion of the rap act in the show as a sign of society's demoralization. "Provocation and the crossing of red lines are now accepted without questioning," Klein said.

The anti-Semitism commissioner said that for his stance against the rap duo, Campino should be honored and preferably with the Order of Merit. "Thank God for Campino," Klein said, insisting that the speech at the Echos Awards "maybe even changed society in the long-term."

Klein criticized the Echo Award committee for clearly focusing on economic gains and added that "if the feelings of Holocaust survivors are hurt" then it is justifiable to end the awards.

She was loved and reviled in equal measure in Argentina: A saintly social justice warrior to some, a self-serving manipulator to others. But globally, Eva Peron remains a pop culture icon.