The rappers' notorious references to Auschwitz and the Holocaust in their lyrics have stirred controversy in Germany. Now they have accepted an invitation to visit the Auschwitz concentration camp memorial. 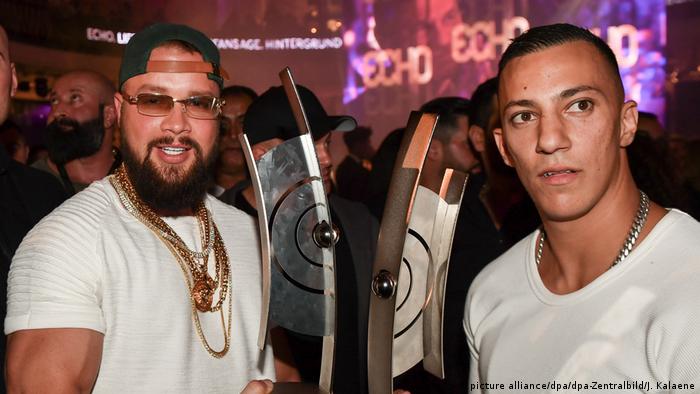 Two controversial German rappers at the center of an anti-Semitism scandal are planning a visit to the Auschwitz-Birkenau concentration camp memorial.

The German daily Bild reported that rappers Kollegah and Farid Bang have accepted an invitation issued by the International Auschwitz Committee.

"We have accepted the invitation," rapper Farid Bang confirmed to the paper. The visit is expected to take place on June 3.

The date had been suggested by Christoph Heuber, vice president of the committee, because both German and Polish youths will be helping workers at the memorial that day.

Heuber said that the rappers' decision to visit Auschwitz-Birkenau is "a signal to their many fans."

The idea for Kollegah and Farid Bang to pay a visit to Auschwitz-Birkenau was suggested by German musician Marius Müller-Westernhagen in an interview with the German newspaper Süddeutsche Zeitung. Müller-Westernhagen was one of various musicians who gave back their Echo music awards after the two rappers also received a prize at the April 3 Echo ceremony for an album that contained lyrics describing their bodies as "more defined than Auschwitz inmates." In another piece, the duo sing: "Commit another Holocaust, come with a Molotov cocktail."

The Echo awards' organizers scrapped the award due the widespread criticism from media, musicians and Holocaust survivors following the rap duo's prize.

A memorial to the victims of the largest concentration camp

The largest of its kind established by Germany's Nazi regime, the Auschwitz concentration camp complex was erected in 1940. The camps Auschwitz I and Auschwitz II-Birkenau were used to exterminate over a million Jews and some 100,000 Poles, Roma, Soviet prisoners and anti-Nazi resistance fighters. Researchers believe that around 232,000 children died on site during World War II.

Established in 1947, the Auschwitz-Birkenau Memorial and Museum preserves the authentic site of the concentration camp in Poland as well as the memory of the victims, hoping to serve as a warning to future generations. The memorial site has grown to symbolize the tragedy of the Holocaust and all other Nazi atrocities.

Read more: Auschwitz-Birkenau: 4 out of 10 German students don't know what it was

Record companies have scrapped the Echo awards after controversy erupted around anti-Semitic lyrics by the winners for best album. The decision came on a day of solidarity rallies with Jewish communities across Germany. (25.04.2018)