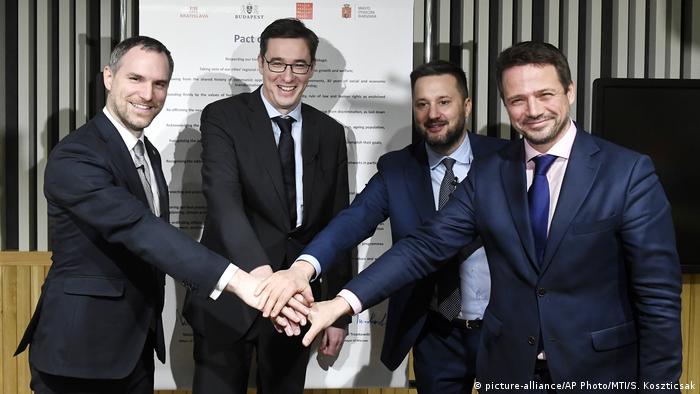 The mayors of Warsaw, Budapest, Prague and Bratislava launched a new alliance on Monday, aimed at securing more direct European Union funding and countering the national political movements within their own nations.

The mayors of the "free cities" have urged the EU to make funds more directly available to communities by bypassing central governments, arguing that cities could spend the money more effectively.

All four politicians surged to power in recent years. Warsaw Mayor Rafal Trzaskowski was elected in 2018. He defeated a rival from the ruling national party PiS, which has joined Hungarian Prime Minister Viktor Orban's Fidesz party in pushing for nationalist, conservative, governments that have antagonized the EU.

Mayor Gergely Karacsony defeated Fidesz's candidate in Budapest in what was considered an upset victory in October this year.

Bratislava is led by Matus Vallo, an architect and leader of a popular rock band, who won his mayoral post as an independent in November 2018, while Prague's Mayor Zdenek Hrib was elected the same month and hails from the Pirate Party.

Cities ‘can do miracles'

Karacsony said the question of whether or not the EU could fund projects directly was worth asking.

"Cities can do miracles in the areas of climate change and innovation. This makes the old adage of 'Think globally, act locally' especially acute," he added.

Moreover, as their countries have been at odds with the EU and in danger of losing its support, the mayors said their cities should not be made to suffer for policies that were not their responsibility.

"I prefer to explain to our friends in the EU that it would be good for us to access EU money despite the fact that our government infringes the rule of law," Warsaw's Mayor Trzaskowski said.

"We're also witnessing that our region is, in some way, closing from the influence of the free Western world," said Bratislava Mayor Matus Vallo.

"Still, in our four capitals we see the highest concentration of diversity. Social, religious, political, ethnic and national,'' he insisted.

The alliance's signing ceremony was held at the Budapest campus of Central European University (CEU).

It was a symbolic location, given that the CEU was forced to move many of its main operations to Vienna, due to legal changes promoted by Orban's government.

The Hungarian prime minister targeted the university for its ties to founder and billionaire George Soros, who is his ideological foe.

In their joint declaration, the mayors committed to "protecting and promoting our common values of freedom, human dignity, democracy, equality, rule of law, social justice, tolerance and cultural diversity".

Thousands of Poles have joined anti-government rallies across the country to voice their support for the embattled judiciary. The march comes after a judge was dismissed for questioning the ruling party's court reforms. (01.12.2019)

The Hungarian government wants to increase its control over the country's theaters. Following massive protests, the law is not as restrictive as originally planned, yet artists fear further regulations are to come. (12.12.2019)

Poland and Hungary have shared a tilt towards the nationalist right, bound also by a mutual distrust of the EU. But their relations with Russia are anything but alike. DW explores the energy ties that bind — and don't.

The French president has said there is a "will to work together" with Hungary despite political rifts between the EU and Budapest over rights violations and rule of law.