Donald Trump and his defense secretary have sent mixed messages on North Korea, with Trump saying "talking is not the answer." The confusion raises questions over whether the US has a plan to deal with the crisis. 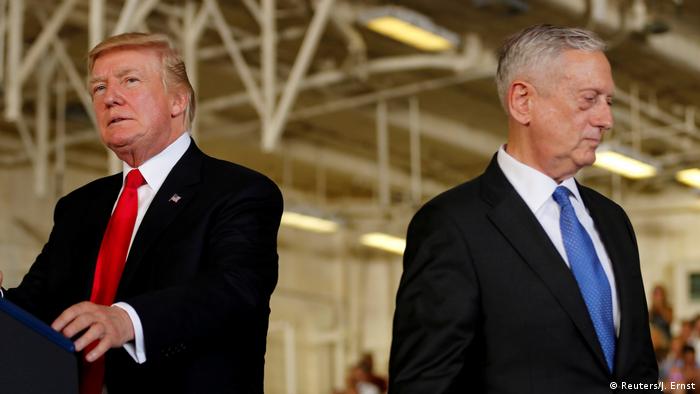 US President Donald Trump said he was against talking with North Korea about its ballistic and nuclear missile programs.

Taking to social media on Wednesday to deliver the message, Trump wrote on Twitter: "The US has been talking to North Korea, and paying them extortion money, for 25 years. Talking is not the answer!"

But as has become typical during the short Trump presidency, he was later contradicted by US Defense Secretary Jim Mattis.

"We are never out of diplomatic solutions," Mattis told reporters before a meeting with his South Korean counterpart, Song Young-moo at the Pentagon.

On Tuesday, North Korea fired a medium-range ballistic missile over northern Japan and into the Pacific Ocean. North Korea said the missile launch was in response to joint US-South Korea military exercises in the region.

The UN Security Council has condemned the latest missile launch as "outrageous," but did not threaten new sanctions on Pyongyang.

In a hint at the military option, Trump said Tuesday that "all options are on the table" in dealing with North Korea.

But his comments fell short of harsher threats earlier this month to unleash "fire and fury" after Pyongyang tested an intercontinental ballistic missile capable of carrying a nuclear warhead that could hit the United States.

After those remarks, North Korea said it would launch missiles near the US military base on Guam.

Read now: Guam - what you need to know

The UN Security Council responded to July's missile test by introducing sanctions on major exports that are expected to cut North Korea's foreign cash earnings by a third.

Seven rounds of UN sanctions over North Korea's nuclear and ballistic missile programs since 2006 have failed to change the regime's behavior.

Japan is pressing the United States to push for even stronger UN sanctions following this week's launch.

Both China and Russia, which have veto power at the UN Security Council, have said new sanctions may be counterproductive.

They have argued that US military maneuvers in the region are partly to blame for North Korea's actions, and urged both sides to negotiate.

Past rounds of international sanctions on North Korea have taken between one and three months to negotiate.

Trump's reference to "extortion" payments to North Korea appeared to refer to $1.3 billion (1.09 billion euros) in food and fuel the US provided to Pyongyang between 1995 and 2009.

The aid was part of a deal of North Korea's nuclear program that was violated.

The US and North Korea haven't had direct negotiations on Pyongyang's nuclear program since 2012.

The altitude and speed of Hwasong-12 would have made it very difficult to destroy missile in flight, while failure would have been embarrassing for Japan and encouraging to North Korea. Julian Ryall reports from Tokyo. (30.08.2017)