US-South Korea military drills - an unnecessary provocation of Kim Jong Un? | Asia| An in-depth look at news from across the continent | DW | 21.08.2017

Amid serious tensions on the Korean Peninsula, the US and South Korea have begun their joint military exercises. For Pyongyang, the drills are a prelude to invading North Korea. Fabian Kretschmer reports from Seoul. 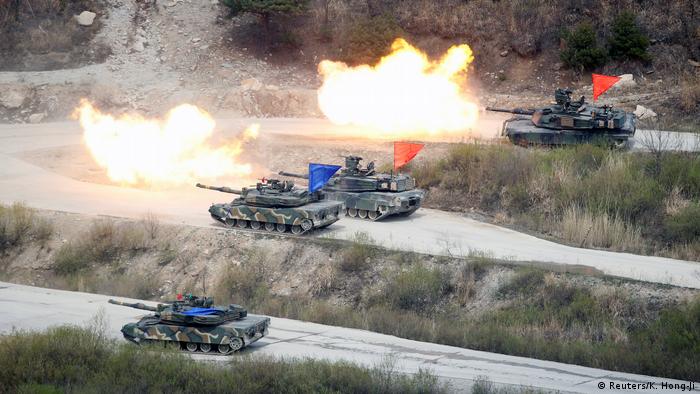 On Monday, South Korea and the US began their much-anticipated joint military exercises. The maneuvers, named theUlchi Freedom Guardian, largely consist of computer simulations inside a bunker facility located south of Seoul. According to the South Korean newspaper Joongang Ilbo, the following scenario, among others, is being tested during the exercise: In a potential military operation, how to carry out a preventive strike against the North Korean leadership.

As expected, Pyongyang responded harshly to the drills. The Sunday edition of the Rodong Sinmun newspaper said the US-South Korea military exercises were a step towards nuclear war, and that they were similar to pouring "gasoline on fire." For the regime led by Kim Jong Un, the "defense exercises" are a preparation for invasion.

History tells us that North Korea reacts harshly to US-South Korean exercises. Last year in August, after joint maneuvers, the North Korean military launched a missile from a submarine. A little later, the communist country conducted its fifth nuclear test.

- Eyeing North Korea, US and Japan to boost military ties

- Where did North Korea get its missile technology?

The 11-day Ulchi Freedom Guardian drill involves 50,000 South Korean and 17,500 US troops. The question remains whether the US will deploy long-range nuclear bombers or atomic submarines to the Korean Peninsula during the drills.

The military exercises always take place at the end of August, therefore they could be seen as a routine affair. But this time around the situation on the Korean Peninsula is extremely tense. In July, North Korea successfully tested an intercontinental ballistic missile (ICBM), after which US President Donald Trump threatened the North with dire consequences. Kim's threat to attack the US Pacific island of Guam  further escalated the situation.

But Daniel Pinkston, a military expert who teaches at Troy University in Seoul, says the US-South Korea drills will not push the region to a war. On the contrary, Pinkston believes the more prepared US and South Korean troops are the lower will be the threat from North Korea.

"Most US troops in South Korea are stationed for only one year. It requires regular exercises to study the communication processes," he told DW.

In recent times, however, calls have been growing for the US and South Korea to suspend their military drills. In exchange for their suspension, China has suggested that North Korea should freeze its nuclear program. Pyongyang has already indicated its willingness to implement such a deal.

Read: What is China's role in the North Korean crisis?

Even a high-ranking US official has for the first time expressed views in favor of at least reducing the scale and scope of the military drills. According to Edward Markey, a Democrat Senator from Massachusetts, it was President Trump who provoked North Korea through his aggressive rhetoric. Now Trump should refrain from using war rhetoric while US troops conduct exercises with their South Korean counterparts, Markey added.

German-Korean filmmaker, Cho Sung-hyun, also points to what she considers a double standard. "If the US engages in drills simulating an invasion of North Korea, it is not considered a provocation, but if North Korea reacts with missile tests and verbal attacks, it is deemed a threat to the whole world," Cho told DW.