North Korea has fired an unidentified missile over Japan, triggering warnings for people in the area. The projectile later broke up and dropped into the sea. It follows three short-range missiles fired over the weekend.

A North Korean missile passed over Japan early on Tuesday morning, breaking into three pieces and falling into the waters 1,180 kilometers east (about 730 miles) of Japan's northern Hokkaido Island, according to public broadcaster NHK.

Japan's Prime Minister Shinzo Abe said North Korea's "outrageous act of firing a missile over our country is an unprecedented, serious and grave threat and greatly damages the regional peace and security," while Chief Cabinet Secretary Yoshihide Suga called the firing of the missile a clear violation of United Nations resolutions.

Abe said Japan was seeking an urgent meeting at the UN on Tuesday afternoon in New York to strengthen measures against Pyongyang.

Abe spoke with US President Donald Trump by phone and said afterward they had agreed to put more pressure on North Korea. "President Trump told me the United States stands behind Japan 100 percent," he said. The countries' top diplomats and security directors also exchanged calls to discuss the launch.

Japan's government had warned people in the north of the country via the J-Alert system, interrupting radio and TV programs to advise that they take precautions. The island nation's military is currently practicing deploying anti-missile batteries at three US bases in Japan. 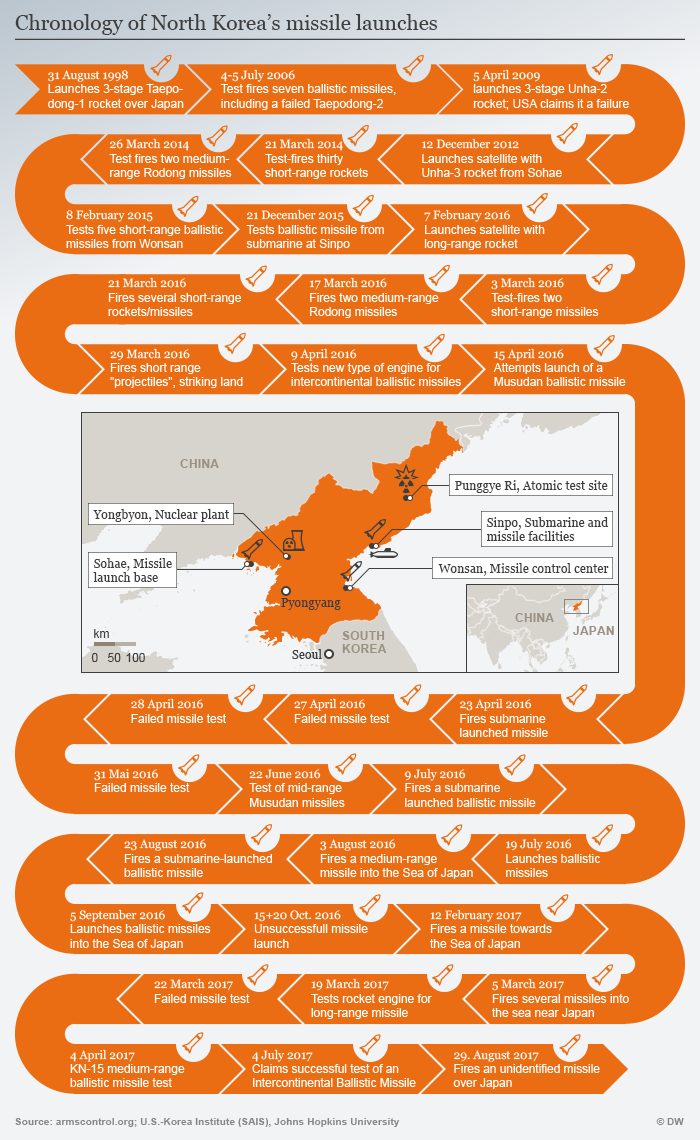 The response from Seoul

South Korea's military said the projectile was fired from the Sunan region near the North Korean capital of Pyongyang just before 6 a.m. (2100 UTC Monday). It did not try to shoot the missile down. The Foreign Ministry in Seoul condemned the launch: "We will respond strongly based on our steadfast alliance with the United States if North Korea continues nuclear and missile provocations."

The South Korean military said it had conducted three flight tests of two new missiles which were close to being operationally deployed. With ranges of 500 and 800 kilometers, the missiles have been described as a key element in the pre-emptive strike capability Seoul is developing to deal with North Korea's nuclear and missile threat.

Earlier Monday, South Korean officials had warned of signs that Pyongyang was preparing for another weapons test.

The European Union condemned North Korea for the launch, saying it would consider an appropriate response after the UN meeting. French President Emmanuel Macron said the launch was "irresponsible," and that he would continue to push for an uncompromising statence towards North Korea.

China urged restraint on Tursday, but said the launch had pushed the situation to a "tipping point."

The situation is "now at a tipping point approaching a crisis. At the same time there is an opportunity to reopen peace talks," Hua told a regular news briefing.

Russia said it was worried about a tendency towards escalation, partly blaming war games between South Korea and the US.

"We see a tendency towards an escalation ... and we are extremely concerned by the general developments," Russia's deputy foreign minister Sergei Ryabkov was quoted as saying by RIA Novosti state news agency.

Ryabkov said the joint military drills between Washington and Seoul, which began on August 21, "had played their role in provoking Pyongyang into this new firing."

The US disarmament ambassador Robert Wood said Washington still needed to do "further analysis" on the missile but warned that it was a concerning provocation.

"It's another provocation by North Korea, they just seem to continue to happen," he said. "This is a big concern, of course, to my government and to a number of other governments."

North Korea's ambassador to the UN responded by saying it was acting in justifiable self defense.

"My country has every reason to respond with tough counter-measures as an exercise of its right to self-defense," Han Tae Song said. "And the US should be fully responsible for the catastrophic consequences it will entail."

The Philippines, which has 242,000 citizens living in Japan and has previously tried to mediate peace talks, called on North Korea to halt its "dangerous and provocative actions." Foreign Secretary Alan Peter Cayetano said the actions "heighten tensions, increase instability and the risk of miscalculation, and could possibly endanger lives."

Indonesia, which has enjoyed decades of cordial relations with Pyongyang, condemned the launch and called on North Korea to halt such provocative actions. Indonesia's Ministry of Foreign Affairs said the launch was inconsistent with its international obligations.

UK Prime Minister Theresa May's spokeswoman said May was outraged by the reckless provocations, and that she would work with international partners to keep pressure on Pyongyang.

The Pentagon said the weekend launches did not threaten US territory - either the mainland or the US island territory of Guam - but Pentagon spokesman Colonel Robert Manning said, "You're still firing missiles, so that's a threat."

North Korea previously fired two intercontinental ballistic missiles in July. In early August, Pyongyang announced it was considering firing four intermediate-range missiles over Japan to land just kilometers from Guam. At the time it derided US President Donald Trump's threat of "fire and fury" as a "load of nonsense."

But days later, North Korean leader Kim Jong Un said he would "watch a little more"and decided to order his army to stand down on the strike.

South Korea and the US are holding annual defensive drills, which North Korea routinely describes as preparation for invasion.

Avalanche warnings after heavy snowfalls in Austria, Italy 3h ago