US President Donald Trump says NATO members that do not meet defense-spending targets will be "dealt with." Germany is far from being on track to meet the alliance's target of 2 percent of gross domestic product. 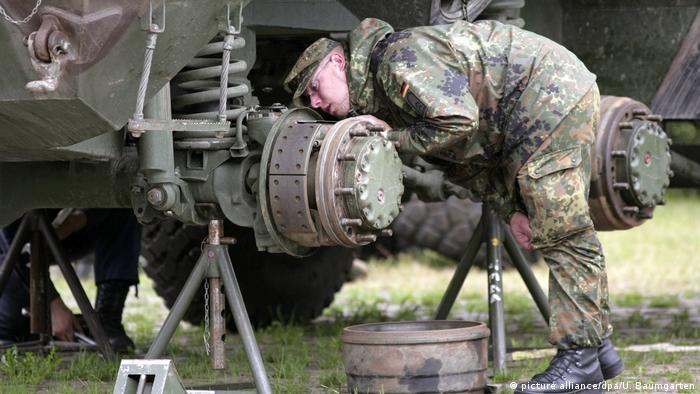 On Thursday, US President Donald Trump again took aim at Germany's defense spending, saying NATO members that do not meet commitments would be "dealt with."

At a meeting with NATO Secretary-General Jens Stoltenberg in Washington, Trump praised seven other alliance members for paying the amount that "they're supposed to be paying."

Germany, he added, "has not contributed what it should be contributing, and it's a very big beneficiary."

"In particular, Germany must demonstrate leadership in the alliance by addressing its longstanding shortfall in defense contributions," Trump said.

The US president has repeatedly railed against Germany for falling below NATO's defense-spending commitments.

In addition to the United States, only Poland, Romania, Estonia, Latvia, Lithuania, Greece and the United Kingdom meet the target.

"It is impacting allies because now all allies are increasing defense spending," he said. "No allies are cutting their budgets."

Last year, Germany only spent 1.2 percent of GDP on defense. The 2018 budget envisions 1.3 percent of GDP going to defense. Despite defense spending increases expected over the coming years, Berlin will still fall far short of meeting its commitments due to economic growth.

Faced with Trump's criticism on spending in the past, German politicians have argued that other expenditures, such as on development and humanitarian aid, should be included in calculations, rather than merely the size of the defense budget.

Germany's military faces multiple problems that have raised serious questions about its capabilities and readiness, which have led to calls for the defense budget to be increased.

Bundeswehr pilots can't get enough flight time amid helicopter shortages and are losing their flying licenses as a result. The report is the latest to shed light on the embarrassing state of Germany's armed forces. (03.05.2018)