Germany's chancellor has hinted that defense spending is likely to increase in years ahead, saying reaching NATO's target was "not completely beyond the imagination." It comes amid budget talks and pressure from allies. Merkel said on Monday that it was important to stand by Berlin's commitments to the North Atlantic Treaty Organization (NATO) and noted that Germany had in the past spent much more than the current 1.24 per cent of gross domestic product (GDP) without any difficulty.

Reaching NATO's target of 2 percent of GDP was "not completely beyond the imagination," Merkel said.

She was addressing top military officers in Berlin, alongside her defense minister, Ursula von der Leyen, on the eve of the budget debate in Germany's parliament. Von der Leyen told the officers military spending would increase to about 1.3 percent of GDP by 2019, with a goal of 1.5 percent by 2025. 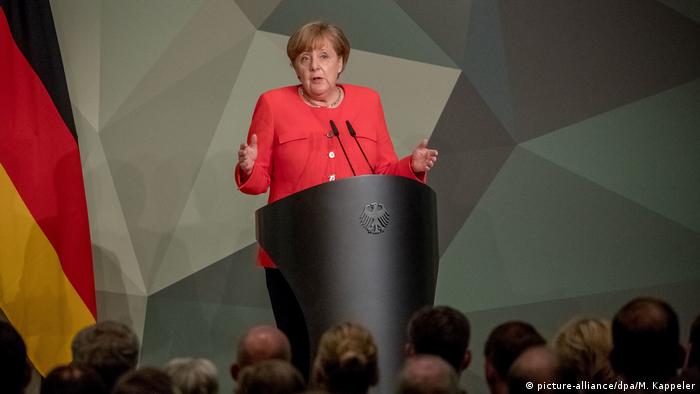 US President Donald Trump in March singled out Germany for failing to meet a defense spending target of 2 percent of GDP agreed upon between NATO members. The target, and a more general bid for Germany to increase its overall military spending and move away from the non-interventionist traditions of its post-war constitution, has long been on Berlin's international "to do" list.

Merkel even acknowledged that current spending — at around 1.2 percent of GDP — raised questions about "Germany's credibility," saying that these were ones she too had experienced firsthand, without naming names. "Therefore we must deal with this," she said.

'Not some kind of fetish'

Speaking at the same conference, Defence Minister Ursula von der Leyen said the financial figures should not be the only focus, but rather total input. She noted Germany put up a large number of troops by comparison with many other NATO countries.

There's strong resistance in Germany to high military spending, which Merkel alluded to on Monday in Berlin:

"A narrative has arisen where I think all of us — and here I'm talking about all parliamentarians — must be careful: [A narrative suggesting] that this 2 percent, or this progression towards 2 percent, is something that could lead to a militarization of Germany," Merkel said. "The people with proper expertise ... of course know that this 2 percent is not some kind of fetish that has nothing to do with our Bundeswehr. Rather, they know that such a sum is necessary to meet our international tasks and to provide domestic defense."

According to Germany's federal industry association, BDI, the shortfall in defense spending was mainly due to stronger-than-expected economic growth last year, which significantly lowered the percentage. Germany is perhaps a low spender in percentage terms, however, the country's former Foreign Minister Sigmar Gabriel has argued that if the target were revamped to include other factors, such as humanitarian aid and stabilization programs, Germany's gross spending would perhaps rank even higher among NATO member nations. That said, NATO has given its members until 2024 to reach the 2 percent goal, and Berlin has vowed to meet that commitment. Merkel's conservatives have clashed with their junior coalition partners the Social Democrats (SPD) — who now control the country's Finance Ministry — over how quickly to boost military spending towards the NATO target of 2 percent. Finance Minister Olaf Scholz has offered the Defense Ministry only half the money it asked for in his budget.

Von der Leyen, a member of Merkel's Christian Democrats (CDU), has called for billions of euros more. Despite the shortfall, she said the budget had risen as a result of the growing economy. "We're on the way, and we're maintaining our course."

The German parliament is set to discuss defense spending on Wednesday.