Bundeswehr pilots can't get enough flight time amid helicopter shortages and are losing their flying licenses as a result. The report is the latest to shed light on the embarrassing state of Germany's armed forces. 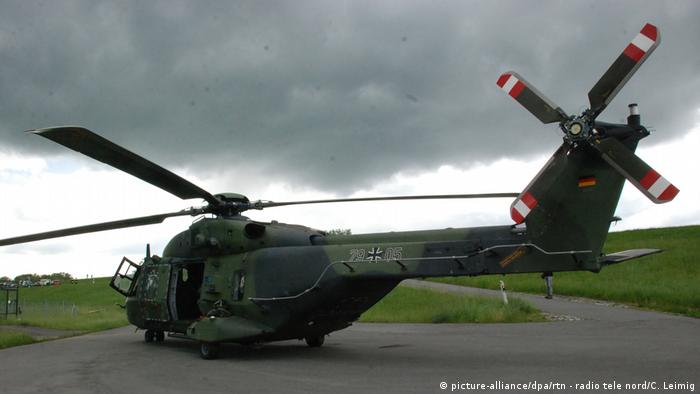 More than one in 10 helicopter pilots in the Bundeswehr lost their flying licenses in 2017 because they could not absolve the required amount of flight time, the government said on Thursday.

The Defense Ministry released the figures in a response to a parliamentary inquiry by Green Party lawmaker Agnieszka Brugger.

Civilians to the rescue

Brugger blamed the failure for some pilots to meet the necessary number of flight hours on a lack of working helicopters.

"Not even a third of the most important types of helicopters are fit for service," she told the dpa news agency. Defense Minister Ursula von der Leyen, Brugger added, was not "getting a grip on the dreary situation."

The shortages reportedly forced the Defense Ministry to start renting civilian helicopters to ensure pilots could still get flight time.

German weekly magazine Der Spiegel reported in late 2017 that the ministry had signed a €21 million ($25 million) contract with the General German Automobile Club (ADAC), which has a fleet of helicopters, to allow Bundeswehr pilots to absolve a combined 6,500 flight hours and thereby keep their licenses.

The opposition Free Democratic Party (FDP) slammed the government over the new figures.

"It's scandalous that Bundeswehr troops are losing their flying licenses because inadequate equipment is preventing them from flying enough," deputy FDP leader Marie-Agnes Strack-Zimmermann wrote on Twitter.

She also wrote that German Chancellor Angela Merkel should intervene and put Finance Minister Olaf Scholz "in his place," without elaborating.

Scholz, a member of the center-left Social Democrats (SPD), has ignited an internal government row with members of Merkel's conservatives after presenting a budget that allocated far less money to defense spending than the defense ministry had asked for.

The row follows months of reports lamenting the poor state of the Bundeswehr and repeated pronouncements from the United States demanding Berlin meet the NATO goal of spending at least 2 percent of economic production on defense. Germany spent 1.13  percent of GDP on defense in 2017.