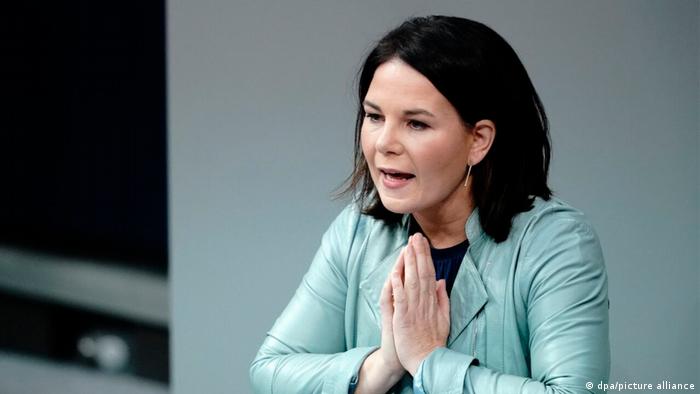 Annalena Baerbock has been sharpening her political profile

Annalena Baerbock has been named the Green party's first-ever chancellor candidate, emphasizing at a press conference on Monday the unanimity with which she and co-leader Robert Habeck had made the decision, and the clarity of their purpose, first formulated at a party conference three years ago: To become a new big tent party for Germany.

"Of course we didn't know then that we'd be standing here today," she said. "But what we knew was that we wanted to open our party up, that we wanted to make policies for a broad society: Inviting, and with clear objectives. And so today begins a new chapter for our party."

"Here, today, I want to make an offer, for the whole of society, as an invitation to lead our diverse, strong, rich country into a good future," she added, warming to the theme.

Baerbock has seen a precipitous rise to power.

The 40-year-old stepped into the limelight at a party conference early in 2018. Wearing a black leather jacket, the still little-known regional politician — a resident of the eastern state of Brandenburg — stepped to the fore and wowed the delegates who had just made her one of the party's two co-leaders.

That was and is remarkable. After all, the environmentalists already had one shooting star: the relatively young and to many charismatic Robert Habeck was soon whispered about as "chancellor material."

But since her rise to the party's co-chair post, Baerbock has not slowed down. The 40-year-old has sharpened her political profile and projected herself as an expert on how to tackle climate change.

Nor has she shied away from thorny foreign policy issues. She's spoken out on the threats posed by far-right populism and xenophobia. So, when in the winter of 2019 the party again convened, Baerbock got a massive 97% backing from the delegates, beating the "man at her side," who got an impressive 90%.

Early on, Baerbock was driven by ambition. Born in 1980 in the small town of Pattensen in Lower Saxony, she was a natural athlete, placing third at Germany's national trampolining championship. She was only 16 when she went to spend a year in the United States. Later, she studied law in Hannover before going on to the London School of Economics, where she studied international law. As a result, Baerbock gives interviews in fluent English — something that even in this day and age still can't be taken for granted among German politicians.

Since she became party co-leader, the Greens have been polling comfortably above the 20% mark. Add to that the party's good showing in European elections, as well in as regional votes in Germany.

But not all is rosy, with the Greens still struggling to gain ground in eastern Germany. But here, too, Baerbock is an asset — and is learning fast, because her family of four has long been based in the eastern city of Potsdam.

Both Baerbock and Habeck have few inhibitions about talking to members of other parties, including conservatives, to seek possible common ground. And there has been much speculation about a possible conservative-Green coalition in Berlin after the 2021 election.

But Baerbock has worked hard toward a well-defined party platform, which differs clearly from the conservative bloc's policies. For instance, she wants to see Germany phasing out coal-powered energy far earlier than the current target date of 2038. She also backs a speed limit of 130 kilometers per hour (80 miles per hour) on the "autobahn," as German highways are known. She also opposes a hike in German defense spending.

This leaves little room for doubt that any potential coalition between Greens under Baerbock and the conservatives could be a volatile arrangement.

In a recent interview with DW, Annalena Baerbock welcomed President Joe Biden's decision to bring the US back into the Paris Climate Agreement. But the Green Party co-leader also mapped out some clear and concrete climate goals of her own.

"We Europeans, including the German government, need to take advantage of the current situation to realize the proposals that the US administration has put forward concerning climate-neutral cooperation. We need to get moving and point the way towards a European and transatlantic Green Deal."

In their recently published election manifesto, the Greens have not — as has so often been the case in the past — flagged a preference for a governing coalition with the center-left Social Democrats (SPD). In any case, that alliance would still require the participation of a third party to reach a majority, with the most likely candidate being the socialist Left Party. A coalition between the Greens and the conservatives would likely not need a third partner to govern.

The city of Potsdam, where Baerbock lives with her husband and two children, will see a high-profile duel in the run-up to the September election. The Brandenburg state capital will provide the backdrop for a head-to-head clash between Annalena Baerbock in the Green corner and Social Democrat (SPD) Finance Minister Olaf Scholz in the red: One chancellor candidate against the other.

Correction: A previous version of this article stated that a coalition between the Green Party and the conservative CDU/CSU would require a third party like the economically liberal FDP or the socialist Left Party. The error was made in the translation process and has been corrected.