German Chancellor Angela Merkel has said the coronavirus pandemic is likely to worsen in coming months. She promised her government would respond by fostering a spirit of social solidarity. 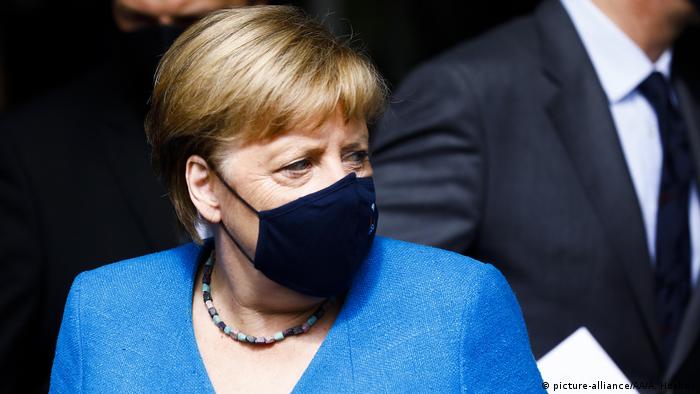 German Chancellor Angela Merkel on Friday warned that the coming months are likely to see the coronavirus pandemic get worse, and called on people in Germany to continue taking the threat seriously.

"We have to expect that some things will be even more difficult in the coming months than in summer," she said at a traditional summer news conference in Berlin.

"It is serious. As serious as it ever was. And keep taking it seriously," she said, adding: "We will have to keep living with this virus."

Her remarks come as the number of new daily infections in Germany continues to accelerate after beginning to rise again in early July.

Merkel said her government would take measures to protect the worst-hit groups in German society, particularly children, who have seen their schooling interrupted amid school closures before the summer.

The government would do "everything so that our children are not the losers of the pandemic. School and daycare need to be the most important things," she said.

She said life could not get back to normal until a vaccine was found, adding that Germany was working on contracts with several drug companies to secure such a vaccine.

She said efforts to keep the economy running and to preserve jobs would be made, adding that a spirit of social solidarity would be promoted to cushion the effects of the pandemic on other groups such as the elderly and low-income families.

Merkel defended the high sums spent by her government in combating negative fallout from the pandemic. Although she admitted that it had been "an unprecedented challenge for our financial capacity," Germany had been able to afford the money owing to the budget surpluses of the past few years.

She also stood by the way Germany has managed the pandemic. "I believe that we have taken decisions up to now in accordance with the best of our knowledge," she said.

But the German chancellor went on to say that some developments could not have been foreseen, such as the way Spain has once more been classified as a high-risk area. "There are hardships for whole groups, no question of it," she said, adding that measures had to be taken to soften the blow.

Merkel also touched on several areas of foreign policy at her conference. Among other things, she called on Russia to respect the sovereignty of Belarus amid anti-government protests there. She said she hoped that Russia would not deploy a police unit to the country as has been proposed by Russian President Vladimir Putin. On the wider question of German-Russian relations, she said that they had always been strained and that it was vital to keep talking with Moscow.

She also said she did not rule out a joint EU response in the case of Russian dissident Alexei Navalny, who is being treated in a Berlin hospital for suspected poisoning.

Merkel noted that 30 Western allies had launched a coordinated diplomatic response after Russian double agent Sergei Skripal was poisoned in Britain. But she said it was still not clear whether Navalny had indeed been poisoned and if so, by whom.

She also rejected any association of the Navalny case with the Nord Stream 2 gas pipeline project, saying it was "not appropriate" to link the two. As it nears completion, the project has caused tensions between Berlin and Washington, which argues that the pipeline could endanger European security, while also wanting to sell more of its own liquefied natural gas to Europe.

US President Donald Trump has had an uneasy relationship with Merkel, and has accused Berlin of unfair trading practices and not paying enough for defense. The US recently announced plans to withdraw around 12,000 troops from Germany, soon after Merkel knocked back Trump's invitation for a G7 summit in Washington due to the coronavirus pandemic.

When asked at Friday's press conference if the US president had "charmed her," Merkel looked down, amused — prompting laughter from reporters — before responding with a smile: "I don't share private conversations, so I am not going to comment on that now."

The question referred to comments made by former US ambassador to Germany, Richard Grenell, at the Republican National Convention earlier in the week. "I've watched President Trump charm the chancellor of Germany, while insisting Germany pay its NATO obligations," he said.

Turkey and the Mediterranean

Merkel also vowed that Germany would work to prevent a row between Greece and Turkey over maritime territories from escalating, saying that a joint solution had to be found regarding economic zones in the Mediterranean.

The chancellor also said that she considered the European Union's goal of becoming climate-neutral by 2050 "manageable," while admitting that it was an "ambitious task that will demand many more changes of us."

Germany currently holds the rotating presidency of the bloc.