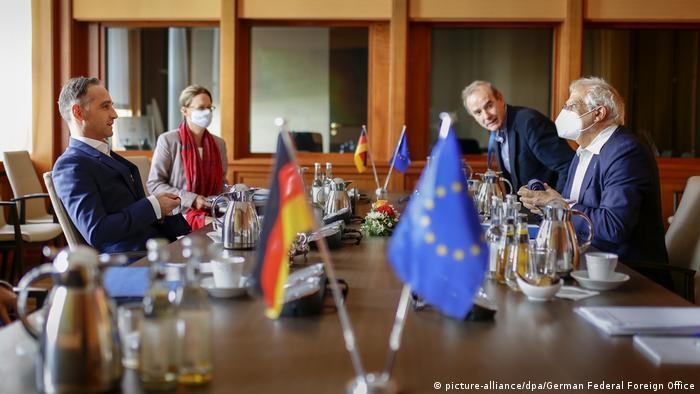 Germany's foreign minister on Thursday called for an end to military maneuvers in the eastern Mediterranean Sea, as Turkey announced it would hold exercises there next week amid tensions with fellow NATO member Greece.

"We need a diplomatic solution for this conflict ... Nobody will solve this conflict with war ships in the eastern Mediterranean," German Foreign Minister Heiko Maas said at an informal meeting of EU foreign ministers in Berlin.

"Germany has striven to contribute to deescalation," she said.

Maas flew between Athens and Ankara earlier this week in an attempt to mediate dialogue between the parties.

Greece and Turkey are vying for control of valuable natural gas reserves, recently discovered off the shores of Crete and Cyprus.

The warning from Germany followed news that Turkey would hold firing exercises in the eastern Mediterranean next week, the latest development in its military tit-for-tat with Greece.

The Turkish navy on Thursday said it will hold shooting exercises off the coast of Iskenderun, northeast of Cyprus, on September 1 and 2.

France on Wednesday joined Greece, Italy and Cyprus in conducting military exercises in the area.

A spokesman for Turkey’s Foreign Ministry, Hami Aksoy, said by deploying French military aircraft to Cyprus, France had violated treaties put in place following the island's independence from the UK in 1960.

Cyprus has existed under divided rule since 1974, when a Greek-inspired coup triggered an invasion from Turkey and the installment of a de-facto Turkish Cypriot state in the island’s north — albeit one only formally recognized by Turkey to this day. It unilaterally declared its independence in 1983.

The squabble over energy resources has reignited past conflicts between Turkey and Greece. The two countries nearly went to war in 1996 over uninhabited islands in the Aegean Sea.