Germany's Maas calls on Greece and Turkey to avoid 'catastrophe'

Foreign Minister Heiko Maas urged the two countries to solve their dispute over rights to a resource-rich area of the eastern Mediterranean Sea. He likened the situation to "playing with fire." 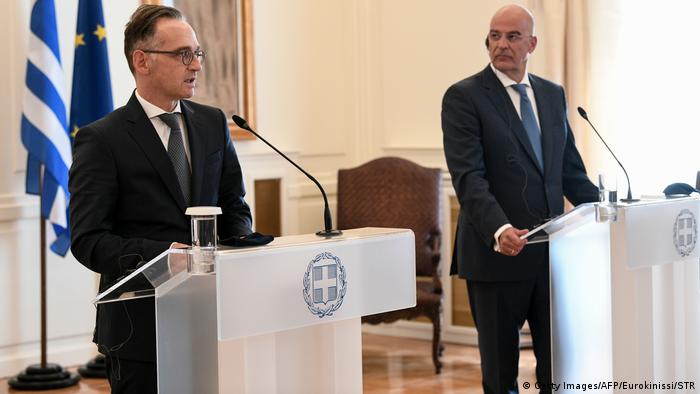 German Foreign Minister Heiko Maas urged Greek and Turkish leaders on Tuesday to solve their dispute over overlapping resource claims in the eastern Mediterranean Sea, citing the risk of a military confrontation.

"The current situation in the eastern Mediterranean is equivalent to playing with fire," said Maas after talks in Athens with his Greek counterpart Nikos Dendias. "Every little spark can lead to catastrophe."

NATO allies Greece and Turkey are in the middle of a dispute over maritime borders in an area believed to be rich in hydrocarbon resources. Greece and the European Union say Turkey's drilling for oil and natural gas in the region is illegal, while Turkey says that the area is within its exclusive economic zone.

The escalating tension has raised concerns of conflict between the two rivals, which have come to the brink of war three times since the mid-1970s, including once over prospecting rights in the Aegean Sea.

"Further escalation can only harm all sides, but above all those directly involved on site," he said, as he set off on his trip to the two countries on Tuesday.

Maas, who is holding the talks in the hopes of de-escalating the situation, said Germany and its EU partners supported Greece in its dispute with Turkey.

He said he had traveled to Athens with two messages: "One message is that Germany and the whole European Union stand by Greece in firm solidarity," he said. "The other — equally important — message is that what we now need absolutely and immediately are signals of de-escalation and a readiness for dialogue.''

"The windows for dialogue between Greece and Turkey must now be further opened and not closed," he said. "To do this, instead of new provocations, we need to take steps towards detente and enter into direct talks."

Maas met with Dendias and Greek Prime Minister Kyriakos Mitsotakis in Athens on Tuesday before traveling to Ankara to meet with Turkish Foreign Minister Mevlut Cavusoglu.

Cavusoglu said Turkey was ready to negotiate with Greece over the Mediterranean dispute, but any dialogue should not include Greek preconditions.

"We will do whatever necessary without hesitation," Cavusoglu said after his meeting with Maas.