Greece is launching military exercises jointly with France, Italy and Cyprus in the eastern Mediterranean on Wednesday, the Greek Defense Ministry has said. Turkey's president warned Greece of taking the "path to ruin." 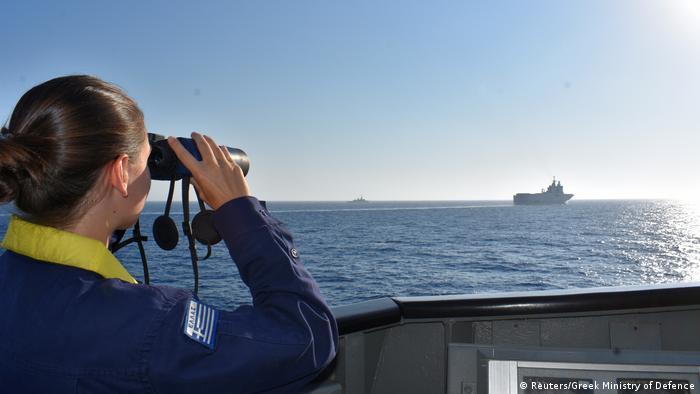 Greece is launching military exercises with France, Italy, and Cyprus in the eastern Mediterranean on Wednesday, amid an escalating conflict with Turkey over natural gas reserves.

The French Armed Forces Ministry confirmed France’s participation, adding that it is contributing three French Rafale jets and one frigate equipped with a helicopter to the military exercises.

"Our message is simple," French Defense Minister Florence Parly said on Twitter, "Priority for dialogue, cooperation and diplomacy so that the eastern Mediterranean becomes an area of stability and respect for international law."

"It should not be a playground for the ambitions of some — it's a shared asset," she said, in an apparent allusion to Turkey.

Turkey, meanwhile, announced that it had carried out military drills of its own with the US Navy. Hours after Greece began its war games, Turkey's Defense Ministry said on Twitter that Turkish warships and the USS Winston S Churchill destroyer had taken part in maritime training in the eastern Mediterranean.

The discovery of gas deposits in waters off the shores of Crete and Cyprus has reignited old rivalries between Greece and Turkey, as both countries scramble to claim the energy resources.

French President Emmanuel Macron in recent weeks has insisted that the EU needs to show solidarity with Greece and Cyprus. The French leader had blasted what he called Turkey's "violation" of the sovereignty of Greece and Cyprus.

The planned extension would not directly involve the disputed territory. But Mitsotakis told parliament that Greece was abandoning decades of "passive" foreign policy.

Responding to news of the military exercises, Turkey said it would not back down from its claim in the Black Sea, Aegean and Mediterranean.

"We will not compromise over what belongs to us ... We are determined to do whatever is necessary," President Recep Tayyip Erdogan said on Wednesday.

He urged Greece to "avoid wrongs that will be the path to ruin."

The escalation comes just a day after German Foreign Minister Heiko Maas shuttled between Greece and Turkey on Tuesday in an attempt to defuse the tensions.

"Any spark, however small, could lead to a disaster," Maas said.

Stuck in the middle with EU

Turkey on Sunday had announced it was extending the length of an exploratory mission in the area. The move prompted Greece to say it would carry out military exercises nearby.

An informal meeting of European Union ministers is planned for Thursday in Berlin. Greece is expected to pressure fellow EU members to hit its rival with sanctions.

Greece’s claim has the backing of the EU — but the bloc has refrained from heavy action against Ankara over fears that Erdogan will follow through on threats to allow migrants currently living in Turkey to pass through into Europe.

A senior EU official, who is not permitted to be named publicly, said that "all options are on the table" for Thursday's talks, which will be chaired by EU foreign policy chief Josep Borrell.

"In the mind of Borrell, what we have is a serious risk to escalate militarily in the eastern Mediterranean. His main concern is to try to reverse that situation,'' he told reporters. "We are living really very challenging times in the relationship with Turkey. We have not seen that before.''

Turkey and Greece have frequently butted heads in the past, nearly going to war against each other in 1996 over uninhabited islets in the Aegean Sea.

This article has been updated to reflect new developments.