The discovery of natural gas in the Black Sea has been hailed as the first of many that will secure Turkey's energy needs for years. Not everyone is convinced that it will reap the rewards promised by Erdogan. His ambitious forecast was met with suspicion by many industry insiders as the country currently relies on Russia, Iran and Azerbaijan for up to three-quarters of its energy needs and the predictions for the new Sakarya gas field — while impressive — are only preliminary.

"Turkey has a crippling energy import bill," Ashley Sherman, principal analyst (Caspian & Europe) at energy research house Wood Mackenzie, told DW. In 2019, those imports cost the country $41 billion (€35 billion) and would have been higher if not for favorable oil prices.

Ankara hailed the new Sakarya gas field as a "miracle," insisting it has the potential to cover one-third of Turkey's natural gas needs. Sherman agrees that the find is "extremely significant" and believes it will "allow Turkey to reset its negotiating power with gas suppliers," especially as many of its long-term — and expensive gas import contracts are up for renewal in the 2020s.

The discovery, however, leaves many unanswered questions about whether the estimated 320 billion cubic meters (11.3 trillion cubic feet) of natural gas can be fully extracted or whether the announcement was as much about helping Erdogan win back public support.

"The find was very hastily announced after such a limited period of exploration," Nate Schenkkan, director for special research at the US think tank Freedom House, told DW.

"If you say this is an economic miracle and that it's going to have this enormous impact, you have to be able to explain the dynamics behind it," he added. "We want to know the price of extraction, the price at which you'll be able to sell it, the rate of extraction...." 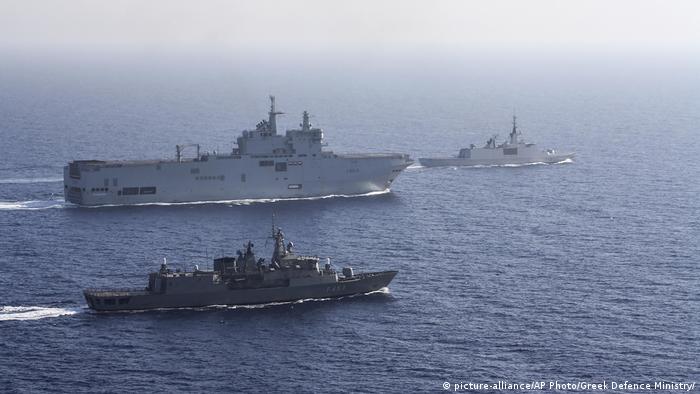 A French Tonnerre helicopter carrier, rear left, is escorted by Greek and French military vessels during a maritime exercise in the Eastern Mediterranean

Erodgan's promise that the first gas would reach Turkish consumers by 2023 was also met with skepticism due to the complex nature of deepwater gas extraction.

"The targeted start-up date already looks ambitious" as it would require a "world-class and near-unprecedented project execution," Sherman told DW. Turkey, however, lacks experience of deep-sea gas production. He said more wells needed to be appraised first to confirm resource estimates and understand the geology of the field, as the Black Sea posed additional logistical challenges.

Other analysts think it could take up to a decade to begin to extract the gas and that the state-run energy firm TPAO will need to form a joint-venture with a foreign energy giant to fully realize the project. Ankara insists it will go it alone but an international tender may be issued to build a pipeline to bring the natural gas to the shore.

While it may not turn out as big as expected, the discovery will be a shot in the arm for an economy that desperately needed positive news. Turkey was already struggling to brush off a debt and currency crisis when the coronavirus pandemic struck in March. Inflation and unemployment remain high, tourism has fallen off a cliff, and Erdogan's increasing authoritarianism has unnerved investors.

However, Turkish economist Ugur Gurses told Gazete Duvar on the weekend that it was "very clear" that Turkey's current account deficit would not end with the Black Sea find and that the gas contribution would have little effect in the long term.

For a few days, news of the Black Sea discovery overshadowed the worsening tensions in the nearby Eastern Mediterranean, where Turkey and Greece are at odds over energy exploration activities. The two NATO members, and Cyprus, have overlapping claims to waters where oil and gas deposits have been discovered.

Schenkkan said it was unlikely that the Black Sea gas field would lead to deescalation in the Med. In recent days, both Turkish and Greece warships have been sent to the disputed waters.

"Ankara seems to be pushing forward on all fronts, which seems to be the foreign policy approach of the last several years," he said, adding that the Black Sea find isn't enough of a "game-changer" to prompt a change in strategy.

The Sakarya gas field has the potential to set up new geopolitical tensions with Ankara's Black Sea neighbors. Turkey's find is close to the convergence of maritime borders between Bulgaria and Romania, which eight years ago announced the largest gas find in the Black Sea in decades. Russian energy giant Rosneft explored the country's part of the Black Sea but without much success.

Wood Mackenzie's Sherman notes that as the Black Sea borders aren't disputed like the Eastern Mediterranean waters, the region has the potential for "improved cross-border energy cooperation," as some of the biggest oil and gas firms are also exploring nearby.

While Turkey's discovery is some competition for Russia, Schenkkan said the Black Sea discovery was unlikely to be a big enough quantity to change Moscow's stance.