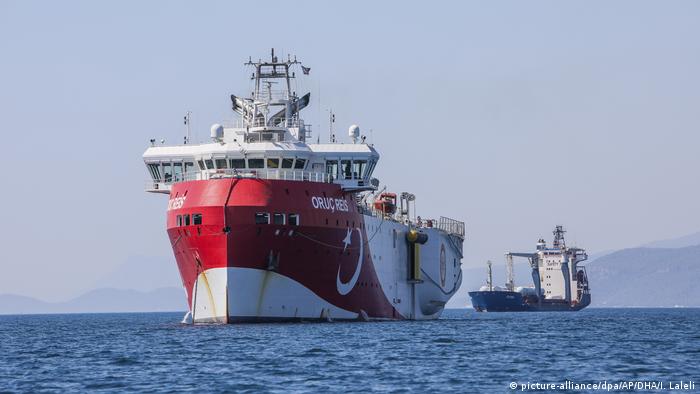 Tensions in the long-standing dispute flared last week between the two NATO allies when Turkey announced it planned to send a research vessel south of the Greek islands of Rhodes, Karpathos, and Kastellorizo.

The initiative was publicly criticized by the United States, France, and other European countries, and the Turkish research vessel, the Oruc Reis, has remained anchored off the southeast Turkish port of Antalya.

Paris and Athens have called for sanctions against Turkey for what they view as an encroachment on Greek and Cypriot waters, while Berlin has warned Ankara to cease "provocations."

Turkey has rejected the criticism and said it is abiding by international law.

Greek government spokesman Stelios Petsas said Monday that Turkey was withdrawing navy vessels from the area, adding that Athens remained ready to enter negotiations with Turkey "within the framework of international law and good neighborly relations."

Turkey accuses Greece of trying to exclude it from fair mineral exploitation in the East Mediterranean, arguing that Greek islands should not be included calculating exclusive economic zones. Athens counters that Turkey's position is a violation of international law.

Turkey says the research mission plan will remain in effect through August 2.

Meanwhile, Spain's foreign minister said that talks in Turkey on Monday had helped to reduce tensions between some European Union members and Ankara over the Turkish energy exploration in the Mediterranean, adding that a one-month pause in drilling was possible.

Foreign minister Arancha Gonzalez Laya, at a news conference in Ankara with Turkish counterpart Mevlut Cavusoglu, said an "inflection point" had been reached on the dispute over drilling for oil and gas in the eastern Mediterranean Sea.

"We have reached some inflection point mainly on the drilling in the eastern Mediterranean and this was a useful dialogue with Mevlut to deescalate tensions that exist," Gonzalez Laya said.

Cavusoglu, however, did not mention any plans to pause.