Greece, Turkey in border dispute after alleged island occupation | Europe | News and current affairs from around the continent | DW | 25.05.2020 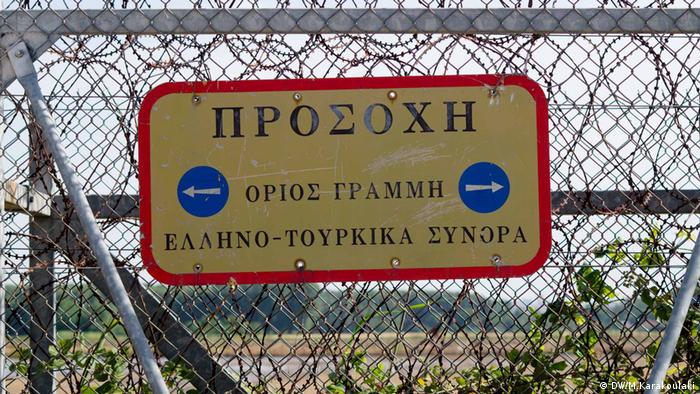 Border tensions between Greece and Turkey aren't new. Back in 2012, Greek authorities erected a 3-meter (10-foot) high barbed wire fence along 10 kilometers (6 miles) of the Evros River, which runs between the two countries, to stem "irregular migration."

This past February, Turkish President Recep Tayyip Erdogan opened his side of the border, allowing migrants to stream toward the Greek side, only to be forcefully repelled by Greek border police. In mid-April, Athens announced plans to extend its fence on Greek soil by another 26 kilometers near the border town of Feres. On May 11, however, Turkey's Foreign Ministry objected to the project, urging a meeting of experts from both countries to ensure the inviolability of the border.

The fact is, however, the Greek-Turkish border has always been in a state of flux. "Over time, the riverbed of the Evros has changed, which is absolutely normal in this region," said Constantinos Filis, executive director at the Athens-based Institute of International Relations. "For this reason alone, there may be slight changes in the border."

As example, he points out the formation of a small swamp along the river in recent rainy months, which has now dried up. The area in question, apparently less than a hectare (2.5 acres) in size, has made it difficult to discern where, exactly, the true border now runs.

Filis told DW that it wasn't clear whether Turkish security forces had illegally entered Greek territory. But that didn't stop Greece's left-wing opposition, under the leadership of former Prime Minister Alexis Tsipras, from demanding the government address "Turkey's arbitrary and aggressive actions." But Greece's armed forces have dismissed reports of a Turkish incursion, and even right-wing daily Dimokratia, known for its regular attacks on Turkey, has expressed doubt over the incident.

Over the weekend, Greek Foreign Minister Nikos Dendias issued a statement saying that "no foreign power is on Greek soil." Speaking to broadcaster Skai TV on Sunday, he rejected reports of a Turkish incursion as "nonsense," adding that Turkey was attempting to "militarize the dispute" but said Athens would avoid walking into this trap. According to Greek weekly paper To Vima, Turkish experts and military figures have carried out measurements along the Evros River near Feres, to determine the exact position of the border — and not just on Turkish soil.

Turkey, meanwhile, doesn't seem especially interested in taking the escalation any further. In an interview with To Vima, Turkey's ambassador to Greece, Burak Ozugergin, said he and his Greek counterparts were in agreement that the issue was "a purely technical question and not a border conflict."

Refugees pushed from both sides of Turkey-EU border

Tensions between Greece and Turkey have increased in recent years, yet the relationship between the two NATO members wasn't always like this. After a severe earthquake shook the Turkish city of Izmit in August 1999, Greek emergency responders came to the rescue. And when the Greek capital was similarly rattled a few weeks later, Turkey reciprocated. This marked the beginning of a period of relatively warm ties between both countries.

But by the summer of 2016, however, that relationship had already began to sour. Following the failed coup against President Erdogan that July, several Turkish officers fled to Greece and sought asylum. Greece has since refused to extradite the men, an act viewed by Erdogan as an affront.

International relations expert Filis said Erdogan's decision to open the border to thousands of migrants this past February, causing violent clashes, backfired. "It hurt his prestige, so now he is trying to make up for it with an aggressive stance, like sending Turkish military forces to the river," he said.