Chancellor Angela Merkel and Germany's 16 regional leaders have agreed to ban major public gatherings and impose a national fine for mask shirkers, as the country grapples with an increase in infections. 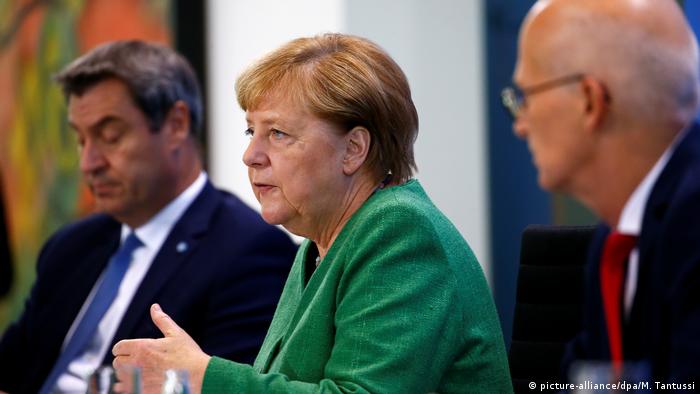 German leaders have announced they will extend a ban on major public events until next year, as part of a raft of measures aimed at reducing the number of coronavirus cases in the country.

The ban was agreed on during a video conference attended by German Chancellor Angela Merkel and the leaders of the country’s 16 states — the first such meeting since June 17.

Merkel stressed after the meeting that "all in all, it is fair to say that we have come through this pandemic well so far. Nevertheless, we can see that the number of infections has risen in recent weeks."

"We take this increase in these summer months very seriously," she added.

Other measures include a minimum fine of €50 ($60) for anyone caught not wearing a mask in shops and on public transport.

There was no agreement on limiting the number of participants for private events. Instead, Merkel and the regional leaders asked Germans to "critically weigh" in each individual case whether private celebrations are "necessary" and "justifiable."

The meeting between Merkel and the state premiers comes as the country grapples with a serious rise in coronavirus cases.

Daily infection numbers in Germany have risen to levels not seen since the end of April.

The surge has been partly blamed on local celebrations, but returning holidaymakers are also held responsible for spreading the virus.

This explains why another measure agreed on Thursday was to end free coronavirus testing for travelers coming back from non-risk areas. Instead, the focus will be on quarantine rules for people returning from high-risk regions.

"The federal and state governments urge all those returning travelers to comply with the quarantine obligations," Angela Merkel stressed.

This could explain the decision to impose the nationwide fine for mask shirkers. Previously, penalties varied wildly from state to state.

Merkel and the regional leaders stressed on Thursday that  "covering the mouth and nose in certain public areas is mandatory and must be consistently controlled and sanctioned by public order authorities." 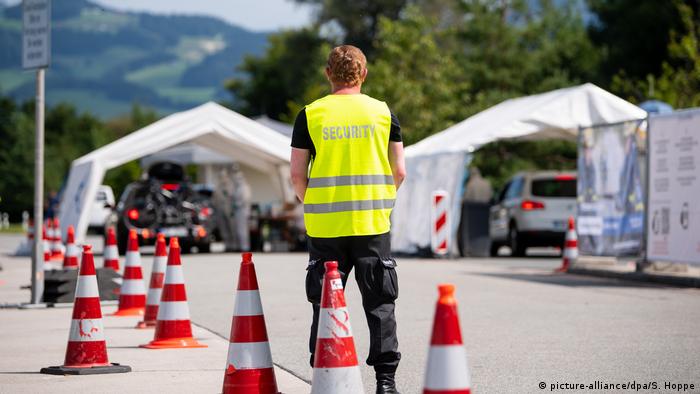 Returning travellers can currently have tests done at the borders

The return to nationwide decisions also marks a political shift in Germany.

When numbers started to fall a few months ago, leaders decided to drop sweeping restrictions and instead focus on local or regional measures to control specific outbreaks.

But the rise in numbers has prompted a change, and the new nationwide measures are already proving controversial.

Read more: How to run an election campaign in coronavirus times

Whereas some politicians believe consistency is necessary to avoid a confusing patchwork of decisions, others say blanket measures disproportionately affect states with a low coronavirus incidence.

Big states like Bavaria or North Rhine-Westphalia have registered nearly three times as many daily new coronavirus cases as all eastern states combined.

The leader of one of those eastern states, Reiner Haseloff of Saxony-Anhalt, which registered 16 new cases on Wednesday, has already indicated mask fines will not be implemented in his region.

No decision on Christmas markets, Carnival

There was no decision on whether to give the green light for Germany’s beloved Christmas markets to operate.

According to sources that attended the meeting, Chancellor Merkel said it was too early to decide on whether to allow Christmas markets.

The chancellor was apparently put under pressure by the regional leader of Saxony, where the Dresden Christmas market takes place.

Under normal conditions, markets are full of people drinking mulled wine and looking at the souvenir and food stalls.

Meanwhile, organizers of the Cologne Christmas market at the city’s iconic cathedral already announced they would not be opening this year.

The organizers cited organization difficulties, saying it would be impossible to hold the event in a way that would not lead to infections.

Made in Germany - Consumption and the coronavirus

The city government of Berlin has called off several planned weekend protests, the largest of which on Saturday expected to draw 20,000 people or more. The organizers plan to challenge the move in court.