The city government of Berlin has called off several planned weekend protests, the largest of which on Saturday expected to draw 20,000 people or more. The organizers plan to challenge the move in court. 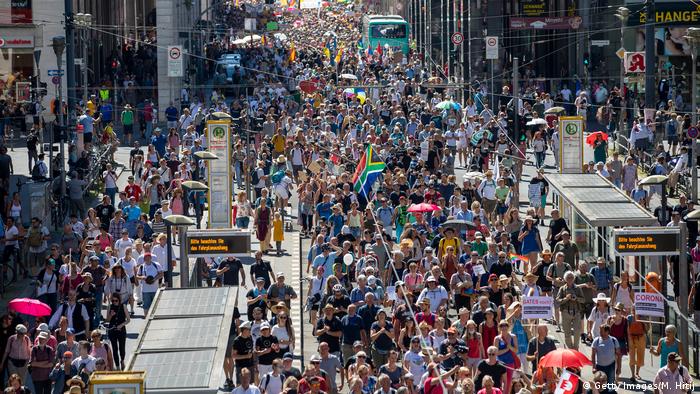 The interior minister for the city-state of Berlin, Andreas Geisel, said the ban was prompted by coronavirus skeptics "deliberately" breaking hygiene safety rules agreed with police during a previous mass Berlin event on August 1 (pictured above). Many attendants did not wear face masks or seek to uphold social distancing measures as requested.

Berlin would not allow itself to be misused for a second time as a backdrop for "coronavirus deniers, Reichsbürger and right-wing extremists," said Geisel, referring to a movement that denies Germany's post-war democratic existence.

He urged all "democrats" to distance themselves from what he termed right-wing extremists using pandemic control measures as a pretext to "question democracy."

Read more:  Is Germany ready for the second coronavirus wave?

The intended 20,000-person rally had posed a "considerable potential for violence," Geisel added, saying Berlin's decision was not against freedom of assembly but instead was seeking to uphold Germany's law designed to guard against the spread of infections.

The lead organizer for next Saturday's rally, Stuttgart-based businessman Michael Ballweg, said on social media that he would challenge the decision in court, declaring: "we assume the assembly will take place on August 29."

Ballweg said rally participants would this time ensure the upholding of hygiene stipulations.

Hamburg-based political scientist Josef Holnburger, who tracks conspiracy theorists on social media, told Germany's dpa news agency that more extreme participants were lobbying for people to attend irrespective of whether the protests were authorized. Holnburger said far-right influencers were inciting via the messenger service Telegram a "storming of Berlin," some even with violent intent.

Jörg Radek of Germany's GdP police trade union — one of two major policing unions — told the RND group of newspapers that assembly rights should never be curtailed frivolously, but banning the Berlin event as a singular case was "plausible."

Christoph Heubner, German author and vice president of the International Auschwitz Committee said Berlin city-state's decision was an important signal that government was able to resist such groups in the future.

Read more:  Germany: How to run an election campaign during coronavirus

Large Düsseldorf concert off for now

In North Rhine-Westphalia (NRW), Germany's most populous state, a pop concert originally scheduled for Friday, September 4, for 13,000 guests in a Düsseldorf stadium was called off on Wednesday by its organizers.

Expected had been rocker Bryan Adams and German pop singer Sarah Connor, billed a pilot return to artists performing before large audiences under the concert title "Give Live a Chance."

Veteran concert organizer Marek Lieberberg said refunds would be made to 7,000 ticket purchasers and the event postponed until an unspecified date in late 2020.

Lieberberg said his firm Livenation still believed its catalog of measures, including masks worn by guests and filling just one in four seats in the stadium, would have offered "comprehensive protection."

The city of Düsseldorf had previously issued conditional approval for the concert.

But NRW state's health minister Karl-Josef Laumann had intervened, saying it was "simply irresponsible," given rising infection rates across Germany, to encourage people to converge on Düsseldorf.

"In view of the current infection situation, I am of the opinion that a concert of this size is currently not feasible," said Laumann.