Coronavirus: How one German state enforces mask-wearing | Germany | News and in-depth reporting from Berlin and beyond | DW | 25.08.2020

In one German state, passengers without masks on trains and buses were handed hefty spot fines in a major police operation. But can one-day clampdowns like this normalize masks — and prevent a second coronavirus wave? 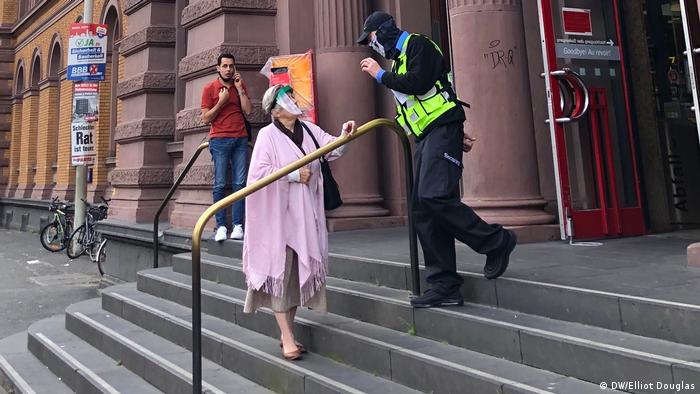 It's midday at Bonn central train station. A group of 15 police officers and public order officials in Germany's former capital are being briefed before fanning out to the platforms, entrances and exits. For this one day there would be zero tolerance for passengers without masks, both in the station and on trains.

It has been compulsory for people on public transport and in shops in Germany to cover their mouths and noses for four months. The rules have rarely been enforced — until now.

On Monday, train and bus passengers without masks in Germany's most-populous state of North-Rhine Westphalia could find themselves hit by on-the-spot fines of up to €150 ($177). The fines were handed out as part of a dedicated 8-hour operation by police and the Transport Ministry. It was the first such exercise in Germany.

"Masks ON!" shouted a pair of burly officers who stood at the main underground entrance to the train station. One frequently broke social distancing rules by marching up to people's faces, finger wagging, to remind them to cover their mouths and noses.

Some of the team were more lenient. An officer in a skull-patterned mask at the main entrance to the station spent a quiet ten minutes gently reminding old ladies about the rules. He did not hand out any fines.

But many others did — during the course of the day 1,707 people were fined in the entire state. 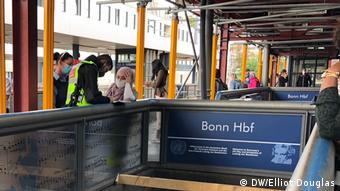 At Bonn train station several fines were handed out

Why was the operation planned?

"The idea of the focused operation is not to make as much money as possible through fines," said Jessica Buhl from travel operator Mobil.NRW, which is affiliated with the state's Transport Ministry. "We just want to remind people to wear their masks."

Eight train stations in the state took part in the operation. Anyone breaking the rules on a train had to disembark at the next station and give their details to an official.

The enforcers were also prepared to deal with passengers who were not willing to cooperate.

"For those difficult cases — well, this is bread and butter for most of them," Buhl laughed. The enforcers, an even split between police officers and public order officers, are used to dealing with drunk, disorderly or difficult passengers.

"They are well-trained and are accompanied by Deutsche Bahn [Germany's largest train operator] security personnel," she explained.

The state-wide fine is one of the highest in Germany, but has not been widely enforced until now. Buhl said she thinks there has been enough time for people to get the message.

"Even for people who don't speak German or come from abroad — masks have been mandatory on public transport since April 27, and the fine has been in place for two weeks," Buhl said. "There is no special treatment, except for people with medical reasons not to wear a mask or children under 6."

Each state is different

Not everyone has welcomed the move — and not everyone thinks it has gone far enough. The passenger rights advocacy association Pro Bahn argues the rules should be uniform across Germany's 16 states.

"It is unfair that a passenger in one carriage might be fined in the state of North-Rhine Westphalia and a passenger in the next carriage would not be fined because the train has crossed into another state in the meantime," he added.

Law enforcers may also hope that the public spectacle of fines being handed out will encourage people to stick to the rules. In North-Rhine Westphalia, social distancing still applies and public gatherings are limited to 10 people. But summer weather and a lack of enforcement have seen many people flout the regulations.

Germany initially received international praise for its handling of the pandemic. But more travelers returning from abroad and the reopening of schools and workplaces for many have increased worries about the risk of a second wave.

For the first time in four months, Germany saw the number of daily coronavirus infections pass 2,000 on Saturday.

"Wearing masks in trains is one of the most effective ways to tackle the coronavirus pandemic," said North-Rhine Westphalia's Transport Minister Hendrik Wüst ahead of the test operation day. "That's why we all need to stick to the rules." 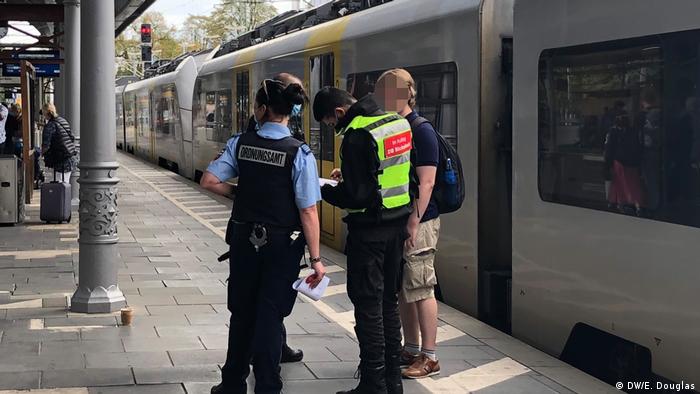 Some of those who flout the rules may be unrepentant

But handing out fines may not be enough for Germany to turn the tide on coronavirus. Tens of thousands of demonstrators are expected once more to take to the streets in Berlin at the weekend in protest of restrictions on public life — and few will be wearing masks. Many of the protesters say masks impinge on personal freedom. Others simply don't care.

At Bonn train station almost everyone wore a mask. Most of the people who were fined or reprimanded by the police were quick to claim ignorance or apologize profusely, either pulling out masks from pockets or quickly leaving the station.

Only one man, pulled aside as he got off a train, did not deny knowledge of the rules. He nodded and accepted his fine without complaint. He told a police officer he did not own a mask and did not see a reason to buy one.

"Crazy," a police officer muttered after they let the man go. Crazy or not, it certainly raises the question of whether nationwide fines — and focused spot checks at the intensive level seen on Monday — would actually make a difference for those who simply refuse to wear a mask.